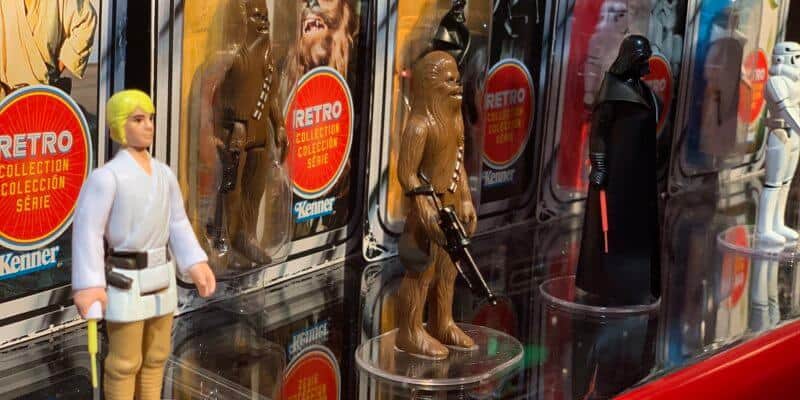 During Toy Fair 2019, Inside the Magic had the pleasure of attending Hasbro’s brand preview event (you can check out our favorite Disney and Marvel items here) and there was so much “Star Wars” stuff to love this year. It was too early for “Star Wars: Episode IX” merchandise since most of that won’t be revealed until Triple Force Friday on October 4, but Hasbro did show off some cool retro-inspired items to celebrate the history of the space saga. For tech-savvy fans, there’s also a lot to look forward to among this new merchandise.

There’s Jabba’s Tatooine Skiff from “Return of the Jedi” and a 3-pack of the Skiff crew, Vizam, Vedain, and Brock Starsher. You can pre-order the Skiff here for $49.99 and the figure 3-pack here for $39.99 from Entertainment Earth.

The Jabba’s Palace Adventure Set includes Han Solo, Ree Yees, and Han Solo in carbonite, which magnetizes to the palace. This set is available in Spring 2019 exclusively at Walmart for an approximate retail price of $49.99.

A Lando Calrissian Skiff Guard figure will be available in Spring 2019 for $12.99 exclusively at Walmart.

This 8-inch figure features realistic detailing and articulation, an exterior skin, and an interior skeletal structure for seamless posing. If this figure sounds cool, it’s even more impressive in person. You can pre-order now for $79.99 at Entertainment Earth here.

Inspired by 1970s Star Wars action figures, the Retro Collection 3.75-inch-scale action figures feature Kenner-style design and detailing. Fans can continue their collection with characters in this assortment including Luke Skywalker, Darth Vader, Princess Leia, Chewbacca, Han Solo, and Stormtrooper. The figures will be sold exclusively at Target for $9.99 each starting in Spring 2019. And for collectors who already have these characters, there’s a new addition just for you — Grand Moff Tarkin, available as part of the Escape from Death Star Game.

General Grievous joins The Black Series as a 6-inch figure. This figure is modeled after the character from “Star Wars: Episode III – Revenge of the Sith” and features premium detail and multiple points of articulation. It’s available at most major retailers starting in Spring 2019 for an approximate price of $29.99.

Celebrate the 20th anniversary of “Star Wars: Episode I – The Phantom Menace” with Duel of the Fates Obi-Wan Kenobi and Darth Maul figures (sold separately). These 6-inch Obi-Wan Kenobi and Darth Maul figures will be available in Spring 2019 for an approximate retail price of $24.99 at Star Wars Celebration and other conventions, and online after the convention.

“Star Wars” fans new and old can discover the exciting action from the series with this assortment of figures and mini comics. Read the included mini comic or scan the bar code to explore the adventures of characters such as Kylo Ren, Rey, Obi-Wan Kenobi, Darth Maul, Boba Fett, General Grievous, and more. These will be available at most major retailers for $9.99 each starting in Spring 2019.

In addition, Hasbro will release extendable and electronic lightsabers that work with the Lightsaber Academy App.

These extendable lightsabers, available in red, blue, and green, extend for a duel with a flick of the wrist. Scan the included bar code to access content in the Lightsaber Academy App. Available at most major retailers for $7.99 starting in Fall 2019.

The electronic lightsaber extends with a flick of the wrist while you battle either Luke Skywalker or Darth Vader. Simulated light and sound effects bring “Star Wars” to life and you can press a button to hear character phrases. Scan the included bar code to access content in the Lightsaber Academy App. Available at most major retailers for $19.99 starting in Fall 2019.

Which of these new Star Wars items from Hasbro are you most excited about? Let us know in the comments, and stay tuned for more Star Wars merchandise reveals during Triple Force Friday this fall.