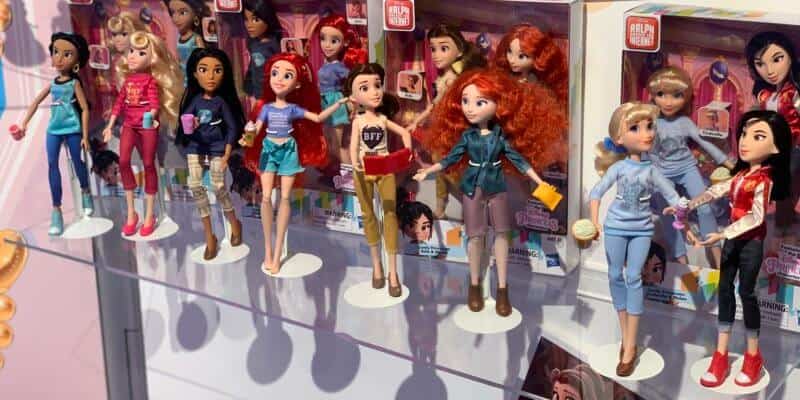 If you’re a fan of Disney and Marvel, you won’t want to miss what Hasbro has in store this season. Inside the Magic got an up-close look at some of Hasbro’s new merchandise during Toy Fair 2019 in New York City, and we’re sharing our favorites with you. The best news? Some of these items are available for pre-order right now!

Several of these dolls were also on display in 2-packs with Jasmine & Aurora, Pocahontas & Ariel, Belle & Merida, and Cinderella & Mulan:

We also got a look at the new Disney Princess Comics Minis, which will be released this fall. The new figures include Moana, Cinderella, Prince Charming, Snow White, Belle, Rapunzel, Mulan, Ariel, Prince Phillip, Jasmine, Merida, and Aurora (pictured below). Additional figures from the series were also on display, and they were all pretty adorable.

In fact, there were Disney Princesses galore in the Hasbro showroom. Take a look at some other cute dolls and toys on display during the event:

Last week, Hasbro revealed new “Descendants 3” dolls exclusively with Inside the Magic and they made an appearance during Toy Fair 2019. These new dolls arrive in stores this fall, and in the meantime, you can catch the premiere of “Descendants 3” on Disney Channel this summer. Be sure to watch the recently released teaser trailer here.

With “Captain Marvel” hitting theaters in just a few weeks, the superhero was in the spotlight at Toy Fair. You’ll definitely be inspired to go “Higher, Further, Faster” with these new “Captain Marvel” toys!

Your friendly neighborhood Spider-Man was also represented with a variety of toys and figures. It’s been a big year for Spidey, with the success of “Spider-Man: Into the Spider-Verse” and the upcoming release of “Spider-Man: Far From Home” on July 5, 2019.

And at long last, Shuri from “Black Panther” joins the Marvel Avengers Legends Series! This 6-inch figure is based on “Avengers: Infinity War.”

In a separate post, we’ll cover the exciting new Star Wars merchandise on display in the Hasbro showroom. Stay tuned!