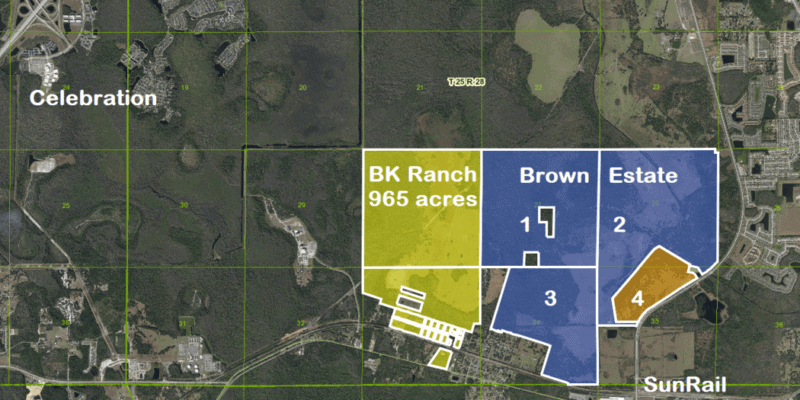 GrowthSpotter reports that Disney has finally convinced one of Osceola County’s pioneer ranching families to sell their land holdings, giving the company access to an additional 1,500+ acres of land.

The sale was made by decedents of the cattle rancher and seven-term county commissioner, Oren Brown, who was reportedly notorious for refusing to sell his land to Disney for the original theme park, reported by GrowthSpotter. But as of January 3, 2019, the land that once belonged to Brown is now mostly gone in a land purchase that cost Disney $11 million.

Back in December, Disney paid $23 million for nearly 1,000 acres of land southeast of Celebration known as BK Ranch in Osceola County. This acquisition was expected to be used for water conservation and wetland mitigation, which is what is believed to be the reasoning for this new 1,500+ acre of land purchase.

“Because of the nature of the property, it would be a prime candidate for a mitigation bank,” said John Adams, a partner with Central Florida Land Advisors, which was actively marketing the Brown property for that use.

The large differences in price between each land purchase are due to different entitlements on each piece of land. “The BK Ranch was entitled for 3,000 homes,” Adams said. “There were no entitlements on this property, and that was reflected in the sales price,” said John Adams, a partner with Central Florida Land Advisors.

The first deal Brown was ever offered by Disney was for his 6,750 acres of ranch and Reedy Creek swamp, which the company offered to pay him a reported $4.2 million for. If the purchase of land had gone through, it would have been used for Walt Disney World. GrowthSpotter reports that Disney had to settle for 27,000 nearby acres for the resort instead.

In an interview with Look magazine back in 1971, Brown didn’t discuss the exact reason why he wouldn’t go through with the sale of the original 6,750 acres to Disney. However, he did state that the money the company offered him had nothing to do with the decision. ”What’s money?” Brown told Look magazine. ‘It’s only paper, most of it…I never could keep money. The land, it won’t run off. Lots of people like money, but I don’t care so much for it. I reckon I’m peculiar that way.”