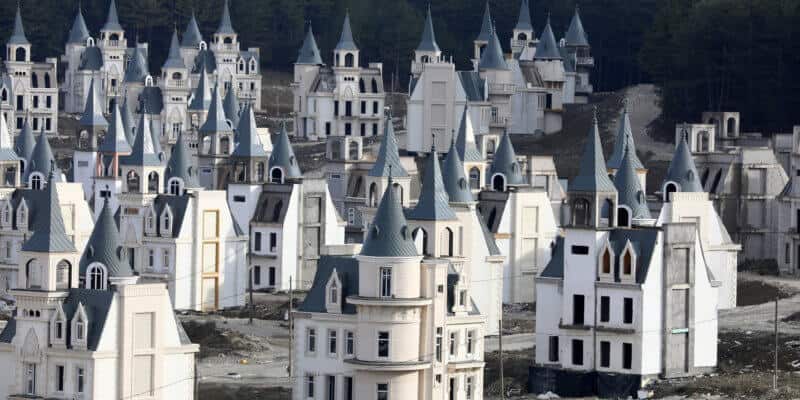 We’ve shared plenty of Disney-inspired travel destinations on Inside the Magic, from fairy-tale villages and homes right in the U.S. to real-life castles that inspired your favorite Disney attractions and movies. But what if we told you that some of the most Disney-like places have nothing to do with Disney at all? Keep reading to find out more about a breathtaking village of European castles that have been completely abandoned and look like they could be right out of a Disney film.

Business Insider reports that these castles are known as the Burj Al Babas, a luxury community for foreign buyers in Turkey. The project began in 2014 as a village with a luxury aesthetic to draw foreigners to Turkey, but amid the country’s economic downturn, the developers of the project have filed for bankruptcy protection after the buyers failed to come up with the money to purchase the homes. Currently, the homes sit empty, abandoned, and ghostly at the base of Turkey’s northwestern mountains.

But even though the Burj Al Babas homes are unoccupied and seemingly futureless, they are definitely stunning to look at. Their blue-gray color scheme is reminiscent of Cinderella Castle at Walt Disney World, and their location at the base of the country’s mountains gives way to fog straight out of a fairy tale.

We hope these homes don’t remain empty for too much longer. Despite political and economic turmoil, the Burj Al Babas architect hopes that the development will open by October 2019. At the time, it’s unclear whether or not the project will continue in the future, but one thing’s for sure. We could totally see this castle-like community as the set or inspiration for a new Disney film, couldn’t you?

Take a look at the abandoned castles in the photos below!

What is the most Disney-like destination you’ve ever traveled to? Let us know in the comments!