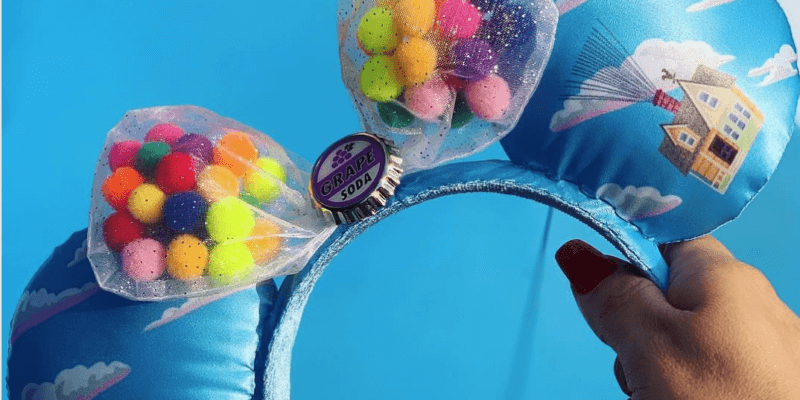 Disney/Pixar fans, look out: new Minnie Mouse ears themed after Disney/Pixar’s “Up” have just floated over to Walt Disney World and Disneyland Resort.

These new high-flying Minnie Mouse Ears are inspired by the adventures of Carl, Russell, and Dug from the beloved film “Up.” In the movie, they journey to the wilds of South America after Carl ties thousands of balloons to his house, which is represented on the ears headband with a blue sky background filled with clouds. On the left ear, you can see Carl’s house with strings stretching to the balloon-filled bow that sits atop the ears.

A Grape Soda pin holds the balloon filled-bow to the top of the ears. Fans of the famous film may remember this pin from the movie, as it’s the same one that Ellie gave to Carl.

These “Up” Minnie Mouse Ears can currently be found in Magic Kingdom at The Emporium for $27.99. The ears can also be found at Disney California Adventure Park on the West Coast.

Only yesterday did the Potion Purple Minnie Ears officially debut at Disney Parks. Those new ears were first seen on Sarah Hyland and Jordan Fisher during the filming of “The Wonderful World of Disney: Magical Holiday Celebration,” which aired on ABC last month.

Word is not yet known whether either the Up or Potion Purple Minnie Ears will make their way to shopDisney, but here’s hoping they’ll be available online soon.

Which of these two Minnie Mouse Ear headbands do you plan on purchasing on your next trip to the Disney Parks? Let us know in the comments below!