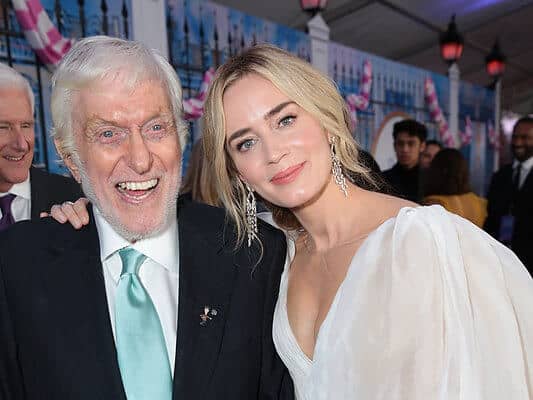 Disney’s “Mary Poppins Returns” had its world premiere at the Dolby Theater in Hollywood on November 29, and the red carpet event was a star-studded celebration of the new movie.

The stars of “Mary Poppins Returns,” including Emily Blunt, Lin-Manuel Miranda, Dick Van Dyke, Emily Mortimer, and Ben Whishaw, gathered with director Rob Marshall to help introduce Mary Poppins’ new adventure to the world. Richard Sherman, who wrote the music for the original “Mary Poppins” with his brother Robert and served as a music consultant on the new movie, was also there to celebrate. Another familiar face from the original movie: Karen Dotrice, who played Jane Banks.

In addition to those involved with “Mary Poppins” and “Mary Poppins Returns,” the red carpet event welcomed many other celebrities, such as John Krasinski, Josh Gad, Karen Gillan, Matt Damon, Billy Crystal, John Stamos, Ina Garten, and “Weird Al” Yankovic. Inside the Magic’s Kurt Schmidt was in attendance as a guest of Nissan, and we’ve got a look at the red carpet event below.

Inside the theater, Dick Van Dyke received a standing ovation as he made his way on stage. In the photo below, he’s joined by director Rob Marshall, Emily Blunt, Joel Dawson, Pixie Davies, and producers Marc Platt and John DeLuca.

Our excitement for “Mary Poppins Returns” keeps growing, and luckily, we only have to wait a few more weeks! The film arrives in theaters on December 19, 2018.