The holiday season has arrived at Walt Disney World and Disneyland Resort, and with it, this year’s Disney Gift Card Holiday Pin series.

A holiday tradition that started in 2009, this seasonal gift card series comes with a limited-edition holiday pin. The 2018 series features Mickey, Minnie, Goofy, and Donald posing in front of translucent stained-glass windows with snowflakes falling in the background.

The corresponding gift cards depict a seasonal scene starring each of the beloved Disney characters. Mickey prepares to decorate the tree with his friend, Pluto; Minnie is pictured with Figaro, who playfully pops out of a present; Goofy and Max have a stack of cheerfully wrapped gifts; Daisy poses prettily while Donald struggles to wrap presents and Chip and Dale get into mischief. 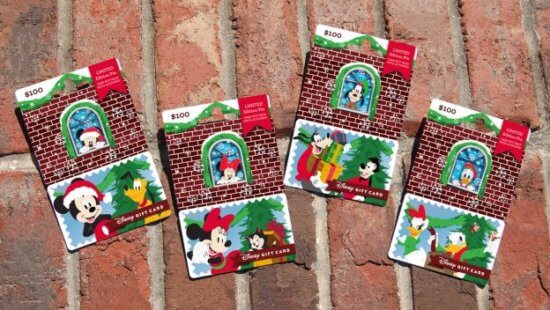 Related : 3 Ways to Save on Disney Gift Cards

The Best Rewards Card for Saving on Disney Gift Cards

These festive Disney Gift Card Holiday Pin sets must be activated with $100, which can be used for pretty much anything at Walt Disney World, Disneyland Resort, Disney Cruise Line, Adventures by Disney, Disney Store locations in the United States, Canada, and Puerto Rico, shopDisney.com, and the Shop Disney Parks app.

If you’d like to give the gift of Disney this season but want something under $100, other holiday-themed gift card options are available at Disney Parks and DisneyGiftCard.com. You can purchase gift cards for $25, $50, or $75, or for $100 and above. Other designs feature Mickey, Minnie, and characters from “Frozen,” “The Nightmare Before Christmas,” and more.

What do you think of this year’s series? We may be partial to last year’s holiday sweater-inspired series, but the 2018 pins also have us in the holiday mood.