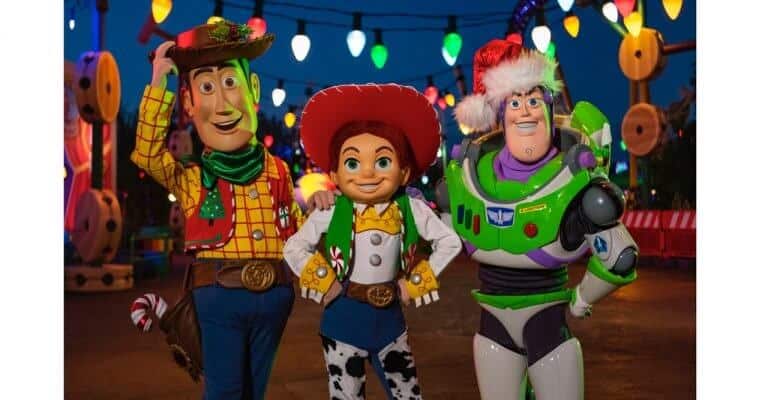 Toy Story Land at Disney’s Hollywood Studios will be decking the halls this holiday season, and the characters are joining in on the seasonal fun, too! Woody, Jessie, and Buzz will don their holiday attire for the first time at Walt Disney World this year in Toy Story Land, Disney announced today.

Beginning November 8, Toy Story Land (and the rest of Walt Disney World Resort) will be celebrating the holiday season with decorations, entertainment, and unique experiences.

Check out the video below to see how Woody, Jessie, and Buzz will dress to impress this holiday season!

WATCH – TOY STORY LAND CHARACTERS TO DRESS UP FOR THE HOLIDAYS:

When the holidays begin at Walt Disney World this November, Toy Story Land will be decorated with colorful lights and sights to get every guest in the seasonal spirit. Alien Swirling Saucers will be getting a holiday overlay with two seasonal tunes, making each ride a joyful experience. Slinky Dog Dash will also get you in the holiday spirit each time you ride, with sleigh bells ringing as you zip along the tracks. Other seasonal offerings coming to Toy Story Land this year include several holiday photo spots, such as oversized cranberry-and-popcorn garland, a holiday card “selfie” of “Toy Story” pals, an oversized Hamm sugar cookie, Green Alien ornaments, and more.

Toy Story Land isn’t the only part of Disney’s Hollywood Studios where you can celebrate the holidays this year. Disney is bringing back Jingle Bell, Jingle Bam! to delight guests with a nightly seasonal fireworks, projection, and music show. Take a look at last year’s show below.

With Walt Disney World’s newest land getting a holiday makeover (and your favorite “Toy Story” characters participating in all the fun), it’s definitely worth a visit to Disney’s Hollywood Studios this holiday season.

What holiday offerings at Walt Disney World are you most excited for?