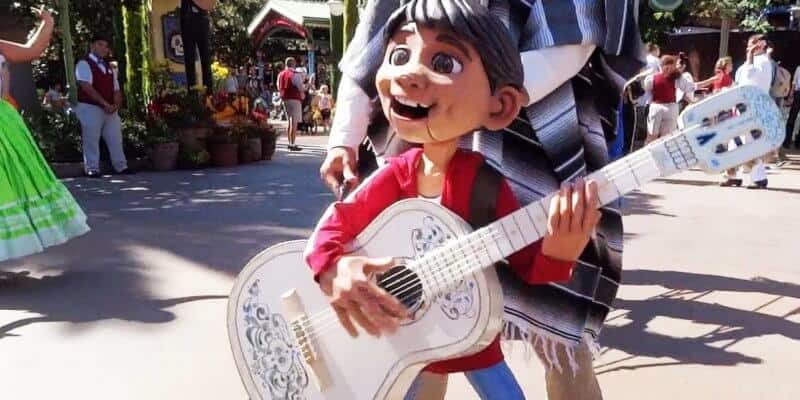 Since its debut last fall, “Coco” has enchanted Disney fans worldwide with its beautiful representation of culture and its artistic rendition of Dia de los Muertos. With the beginning of fall at Disneyland Resort came new and returning “Coco” theming throughout the parks. Below, we’ve got your guide to enjoying all things “Coco” at Disneyland this fall.

Celebrate with Miguel Himself

This year, you can see (and even interact with) an advanced puppet version of Miguel, the charming and fun-spirited protagonist of the beloved Pixar film. “A Musical Celebration of Coco” at Disney California Adventure returned this September after its highly successful 2017 debut. The Mariachi Divas are performing through November 4 in Plaza de la Familia, usually known as Paradise Gardens, several times throughout the day. The performances feature Miguel and several of his friends from the land of the dead, just like in the film, as well as renditions of the heartwarming “Coco” songs we know and love.

WATCH – MIGUEL PUPPET IN “A MUSICAL CELEBRATION OF COCO” AT DISNEYLAND RESORT 2018:

This Miguel puppet is lifelike, expressive, and truly one of a kind. Its childlike stature is sure to impress even the smallest of fans. Young park guests can interact with the puppet up close and personal, and you can even sing and dance along to your favorite tunes from the award-winning film. Be sure to check out the Musical Celebration before it’s gone for the season on November 4!

Even though Pixar Fest has come and gone, Disney is offering even more “Coco”-inspired dishes at both Disneyland and Disney California Adventure throughout this Halloween Time season.

Paradise Garden Grill has switched up their menu once again with Mexican-inspired eats and treats. This is a recent theme of the Disney California Adventure restaurant, as Disney has changed the menu with the season. Earlier this year, the restaurant featured Asian-inspired dishes during the Lunar New Year celebration. This season, guests can enjoy savory dishes such as the Yucatan-Inspired Vaporcito (a chicken tamale steamed in banana leaves) and Tortitas de Papa con Queso (crispy potato cakes with Oaxaca cheese). The menu’s dessert fare includes Mexican hot chocolate and Conchita (a traditional Mexican sweet bread).

But that’s not all! If you are planning on taking on both parks, Rancho del Zocalo in Disneyland is serving up “Coco” eats as well. While the Frontierland restaurant always serves Mexican-style dishes, their seasonal dessert menu features even more. This includes a Frozen Abuelita Hot Chocolate and Horchata blend and an Orange Sugar Skull Pot de Creme, both of which are definitely photo-worthy.

These indulgent delicacies will only be around for a limited time, so stop by these two restaurants before November 4. Hopefully, Disneyland will make some of these eats permanent. Many guests love to see their favorite dishes served in innovative ways throughout the theme parks.

One of the best ways to show your Disney side and embrace the spirit of “Coco” and Dia de los Muertos this season is snagging a snapshot. You can strike a pose at one of the many “Coco” photo spots throughout Disneyland and Disney California Adventure.

First up is the “Coco” billboard on this year’s newly reimagined Pixar Pier in Disney California Adventure. While this should be around year-round since it was installed with the opening of Pixar Pier this summer, it’s a timely and artistic tribute to family and togetherness.

The “Coco” Wing Wall (as it is aptly known on Instagram) is a new and colorful addition to the film’s presence in the parks. Housed near the Plaza de la Familia, this wall has taken the parks (and the internet) by storm with its beautiful representation of the spirit guides from the movie.

The Arbol de la Vida (tree of life) is another vibrant and beautiful place to take a commemorative photo in celebration of the festivities. Guests can even partake in the tradition of sharing memories of loved ones on the memory wall nearby.

There are also several marigolds planted throughout Disneyland and Disney California Adventure as a symbol of Dia de los Muertos. Just as “Coco” included imagery of marigolds throughout the film, guests can take pictures of the golden flowers as they make their way throughout the parks. Marigolds are believed to be used to guide the spirits of loved ones home during the Dia de los Muertos holiday. Host your own marigold scavenger hunt and see how many marigold photo opps you can get this season.

New “Coco”-themed merchandise is available for purchase at the parks and Downtown Disney District as well. Several clothing and household items featuring the iconic sugar skulls are included in this year’s Dia de los Muertos merchandise selection. Additionally, Downtown Disney District’s Wonderground Gallery offers “Coco” and seasonal artwork for sale. Visit that location for some original pieces this season. Be on the lookout for even more “Coco” merchandise as we move into the holiday season in the parks.

Those who celebrate the annual fall holiday can embrace the spirit of the season by visiting the numerous ofrendas (altars) displayed throughout the two parks. And those who do not normally celebrate can learn about the culture and meaning behind Dia de los Muertos as well. In Cars Land, an ofrenda pays tribute to the iconic Doc Hudson. And in Frontierland, guests can view a more traditional ofrenda in Zocalo Park. Both sites offer glimpses into the tradition and cultural representation of Dia de los Muertos.

While Disneyland and Disney California Adventure have embraced Halloween to the fullest, we’re so excited they have made an effort to represent numerous cultures over the years, and the “Coco”–themed dining, entertainment, and photo opportunities are no different. Soak up the magic and spirit of “Coco” before November 4, and keep your eyes open for more “Coco” this year. This season won’t be the last time we see the beloved Pixar movie represented in the parks.

Comments Off on Loco for Coco: Your Guide to All Things “Coco” at Disneyland Resort This Fall