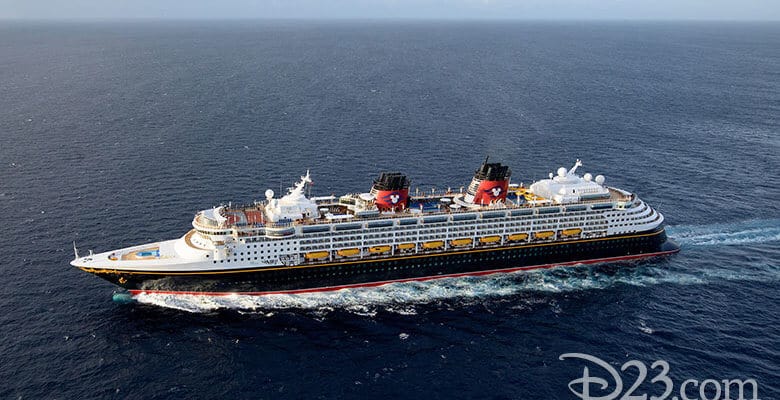 Disney Cruise Line recently premiered their new show “Disney at Sea with D23,” a 30-minute program sharing Disney news to guests aboard the Disney cruise ships. Guests aboard the “Disney Wonder” last week were treated to viewing the new show, which will detail what’s new and what’s to come for the Walt Disney Company, from the worldwide theme parks to entertainment and beyond.

The Disney Cruise Line news program will be updated monthly with new content, so returning cruisers will be treated to the latest news every time they sail aboard a Disney cruise ship. The inaugural show was held in the Buena Vista Theater, and Disney plans to host shows aboard every cruise on every ship.

“Our friends at Disney Cruise Line reached out and asked us to develop a show that would take guests on a journey through all the incredible entertainment and experiences coming from Disney, Pixar, Marvel, and Lucasfilm,” says Michael Vargo, head of D23. “It’s thrilling to share all of the exciting news—and our love for Disney—with our guests on the high seas.”

In the premiere screening of “Disney at Sea with D23,” “Disney Wonder” guests saw a first look at the new “Captain Marvel” trailer and the latest concept art for Galaxy’s Edge at Disneyland in Anaheim and Hollywood Studios in Florida, Disneyland’s Tropical Hideaway, and Tokyo DisneySea’s upcoming park expansion. The program also shared details of how Disney fans around the world are celebrating Mickey Mouse’s 90th birthday, as well as how Disney is celebrating the anniversaries of “Hocus Pocus” and “The Nightmare Before Christmas.”

This news program is just one of the many entertainment offerings aboard Disney Cruise Line ships. Each ship offers live entertainment performances, screenings of new or soon-to-be-released Disney films, and meet-and-greets with your favorite Disney characters. “Disney at Sea with D23” is a program that will allow guests aboard the Disney Cruise Line ships to get up-to-date information about what’s going on in the Disney company while still enjoying their vacation.

To book a Disney Cruise we recommend you contact our friends at Academy Travel, a Disney Authorized Vacation Planner.