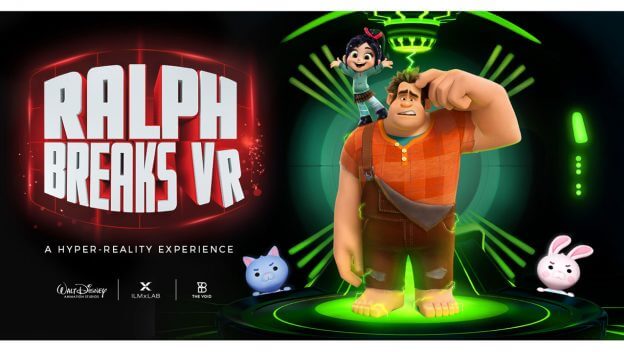 Soon, Disney fans will be able to explore the worlds of their favorite films in new hyper-reality experiences from The Walt Disney Company, ILMxLAB, and The VOID. The first of these multi-sensory experiences, “Ralph Breaks VR,” is based on the upcoming film “Ralph Breaks the Internet” and arrives in Fall 2018.

“Ralph Breaks VR,” an original adventure, immerses users in the world of the internet and online gaming and features Wreck-It Ralph and Vanellope. A launch date and trailer, as well as ticketing and location information for the new experience, is expected soon.

“Our filmmakers and the terrific people at ILMxLAB have collaborated to bring an incredible hyper-real experience, for all ages, to The VOID,” said “Ralph Breaks the Internet” producer, Clark Spencer. “We can’t wait for people to be immersed in the worlds of the internet and online gaming with Wreck-It Ralph and Vanellope.”

Other Disney franchises will also get the hyper-reality treatment in the future. “At ILMxLAB, we are truly excited for fans to ‘Step Inside Our Stories’ by extending our award-winning creative collaboration with The VOID across The Walt Disney Company. Together, we will soon invite guests into other beloved Disney franchises where they can explore rich worlds, engage with compelling characters, embark upon heart-pounding adventures, and indulge the senses — experiencing the magic as never before,” said Vicki Dobbs Beck, ILMxLAB Executive in Charge.

The Walt Disney Company, ILMxLAB, and The VOID previously collaborated on “Star Wars: Secrets of the Empire,” a hyper-reality adventure that’s currently running at Disney Springs at Walt Disney World and Downtown Disney District at Disneyland Resort, among other locations. During that experience, guests move freely around the space and interact with “Star Wars” characters while completing a mission to recover Imperial intelligence.

To learn more about the magic behind “Star Wars: Secrets of the Empire,” take a look at our interview with the creative team below.

To purchase tickets to “Star Wars: Secrets of the Empire,” visit The VOID website here, and stay tuned for more information on “Ralph Breaks VR” and other upcoming Disney-inspired hyper-reality experiences.