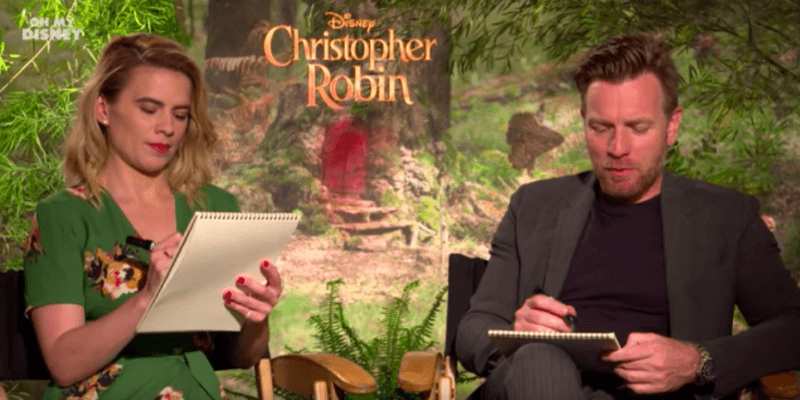 Winnie the Pooh, Christopher Robin, and all of their friends from the Hundred Acre Wood are back in theaters in Disney’s “Christopher Robin.” Two of the film’s stars, Ewan McGregor and Hayley Atwell, and Director Marc Forster sat down with Oh My Disney to discuss the film in a rather unique interview.

McGregor, Atwell and Forster were each asked to pick a name of one of the residents of the Hundred Acre Wood out of a hunny pot and draw that character while being interviewed about the movie. You can see the results for yourself in the video below.

Forster was asked what it was like directing the iconic characters of the Hundred Acre Wood.

“It was a real gift,” Forster responded. “Working with Pooh and working with the Hundred Acre Wood characters was just something very magical.”

Atwell and McGregor has some thoughts on working with the iconic bear as well.

“I’m not going to lie, he’s a bit of a diva at times when he doesn’t get his honey,” Atwell joked. “But give him plenty of honey then, you know, he’s a happy little guy.”

“He’s a sweetheart,” McGregor said. “He’s simple and straightforward and he says what he sees and there’s no games playing with him.”

Disney’s “Christopher Robin” is in theaters now. Be sure to check out our spoiler-free review of the new film here. And see four quotes from ‘Winnie the Pooh’ books featured in the movie here.

Have you seen Disney’s Christopher Robin” yet? What did you think? Let us know in the comments below!