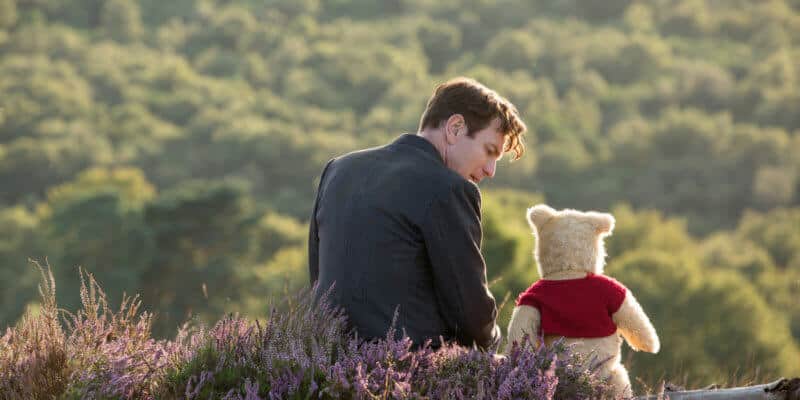 Back when Disney first announced its new movie “Christopher Robin,” about an overworked grown-up version of the title character whose strained familial relationships spark a regression into the fantasy world of his childhood, all I could think of was, “This sounds an awful lot like ‘Hook’.” And indeed, upon seeing “Christopher Robin” at a press screening last week, I can confirm that it does bear a striking resemblance, plot and structure-wise, to Steven Spielberg’s 1991 sequel to the J.M. Barrie “Peter Pan” stories. But it also manages to stand on its own, deliver a decent number of laughs alongside its more heartfelt moments, and bring a surprisingly somber tone to the Hundred Acre Wood.

Ewan McGregor (Obi-Wan Kenobi of the “Star Wars” prequels) stars as, yes, Christopher Robin, who spent his youth lost in an imaginary wilderness populated by living stuffed animals Winnie the Pooh, Piglet, Eeyore, Rabbit, Owl, Kanga, Roo, and Tigger. In the original stories by A.A. Milne, and the classic Disney animated shorts and features they inspired, the audience never saw any human beings other than Robin, and the entirety of each installment was spent in the Hundred Acre Wood, never allowing Pooh and friends to venture out into the real world. “Christopher Robin” the movie, however, turns that notion on its head, with the bulk of the film spent in post-war London– though our hero does find an excuse to return to the countryside cottage of his boyhood, and then back into Pooh’s domain.

It turns out, rather shockingly (in that the movie doesn’t ever quite address the reality of the situation), that Winnie the Pooh and his plush buddies are actual living creatures– not just figments of the protagonist’s imagination– who passers-by can see moving and talking once they enter the bustling cityscape where adult Christopher Robin lives and works. That bizarre choice is brushed aside by having incidental characters blink their eyes in disbelief and otherwise dismiss these otherworldly beings as hallucinations or, as Robin attempts to pass them off as, small household pets.

Once Christopher accepts the potentially nightmarish concept that his imaginary friends have somehow materialized themselves into existence, the adventure begins. Pooh accompanies his human chum back in the Hundred Acre Wood in search of the rest of the gang, and once reunited, they all venture back out into the real world to probably-too-tidily resolve both a family crisis and Robin’s employment woes all in one fell swoop. Christopher’s wife Evelyn (played by Hayley Atwell, AKA Agent Peggy Carter of the Marvel Cinematic Universe) and his daughter Madeline (relative newcomer Bronte Carmichael) eventually join in on the fun after feeling left out for the first half of the movie, which helps hammer home its “spend more time with family and less at work” message.

Director Marc Forster (“Finding Neverland,” “World War Z”) gives the first act of “Christopher Robin” a curiously melancholy tone and strangely muted color palette, especially when considering the buoyant feel and bright hues of Disney’s existing forays into this franchise. But things brighten up a little once the Pooh squad gets back together, and though children might be bored for the opening third of the movie, there’s a decent amount of fun to be had later on.

All told, “Christopher Robin” is charming enough to coast by on its cast and the prospect of revisiting characters we’ve known and loved for so many decades. Just hearing journeyman voice-over artist Jim Cummings embody Winnie the Pooh and Tigger again on the big screen should make a ticket purchase worthwhile to Disney fans, and who wouldn’t get a kick out of seeing the Hundred Acre Wood lovingly realized in live-action? There’s nothing about “Christopher Robin” that will resonate through the ages the way these stories have previously, but at the same time it manages to be a moderately worthwhile bit of nostalgia.

Comments Off on REVIEW: Disney’s “Christopher Robin” is a maudlin but charming reunion between old friends