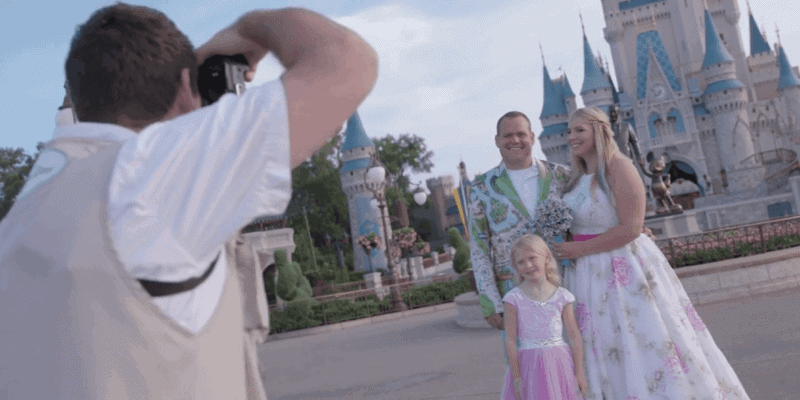 Ben and Kylie both grew up in the United Kingdom before moving to Central Florida. The couple met while working at a theme park, had their first date at a theme park, and spent their second date at Disney’s Hollywood Studios. They jokingly bought a set of Mickey and Minnie wedding ears on that second date. “Little did we know that we’d be using those same hats at our Epcot bachelor/bachelorette party!” said Ben.

Ben regularly creates specially themed jackets to wear to the International Association of Amusement Parks and Attractions (IAAPA) convention in Orlando, and he wanted to create something extra-special for his Spring 2018 wedding. He worked for three months to find the perfect material and tailor the amazing jacket.

To create her own special Disney-inspired accessory, Kylie crafted a wedding bouquet out of Disney Parks maps. Since the couple spent part of their honeymoon at Disneyland Resort, the bouquet also includes maps from the California park in addition to some Mickey icon jewels.

There’s no doubt their daughter, Lyla, is well on her way to becoming a big Disney Parks fan, too. “The first time she stood up was at Disney Park. First steps were at a Disney Park, actually. She keeps us young. She makes the memories for us,” Kylie said.