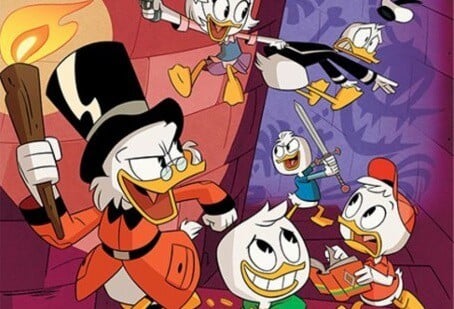 If you’re enjoying the excellent new Disney XD / Disney Channel “DuckTales” animated adventure series as much as I am, you’re going to want to own all the lovingly-crafted and hilarious episodes on home video. So far Disney has taken an odd approach with issuing those episodes, made even stranger considering the first season hasn’t even finished airing yet.

I was sent a review copy of “DuckTales – Destination: Adventure!” ahead of it’s release, and while it’s nice to have another batch of episodes on physical media, it’s a little frustrating that they’re still being presented out of order, after already airing in a different sequence than they had been intended to run. I’m personally hoping for a full-season boxed set on Blu-ray (with all episodes in the proper order ) once the season has finished airing on Disney Channel. For now, fans will have to make do with these arbitrarily-curated releases.

The PLAY ALL function is available, as well as Disney’s Fast Play, which automatically begins playing the feature content, bypassing the main DVD menu. The menu can still be accessed, however, by simply using your DVD or Blu-ray player’s remote control.

1 – “The Beagle Birthday Massacre!” (Episode 106) – After crashing Ma Beagle’s birthday party, Webby and new mysterious friend Lena must fight their way through Beagle Boy turf to get back home.

2 – “The Living Mummies of Toth-Ra!” (Episode 109) – In a lost pyramid, Louie interprets a pharaoh’s prophecy to his advantage, forcing Scrooge and Launchpad to convince a group of living mummies to rescue him.

3 – “The Impossible Summit of Mt. Neverrest!” (Episode 104) – Scrooge and Huey are determined to be the first to set foot atop an impossible summit, but the snow-capped mountain holds a treacherous secret that tests both their willpower and survival skills.

4 – “The Spear of Selene!” (Episode 112) – Donald is dragged into a feud between Scrooge and Zeus, while Dewey and Webby search for an artifact that may provide the truth about Dewey’s mother.

“New Gizmo-Kids on the Block” (original series episode 403) – Fenton’s mother accidentally shrinks the GizmoDuck suit, and the child-size suit ends up in the hands of Scrooge’s nephews.

“Ducky Mountain High” (original series episode 317) – Scrooge meets up with Glittering Goldie again in order to acquire land filled with golden trees from her. However, Glomgold also wants that land.

I recognize “DuckTales – Destination: Adventure!” is less an item for Disney collectors, and more a DVD to put in to entertain your kids for a couple hours. More serious-minded “DuckTales” fans are going to have to wait for a more comprehensive release of this series (if one is eventually destined to hit shelves). But as it stands, these episodes are all pretty fun and they look and sound fine, taking into account the standard-definition presentation. 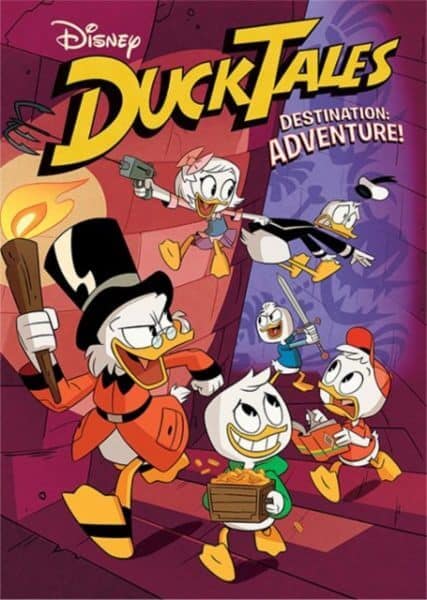 Disney Cancels ‘DuckTales’ – Will EPCOT Project Be Cut, Too?