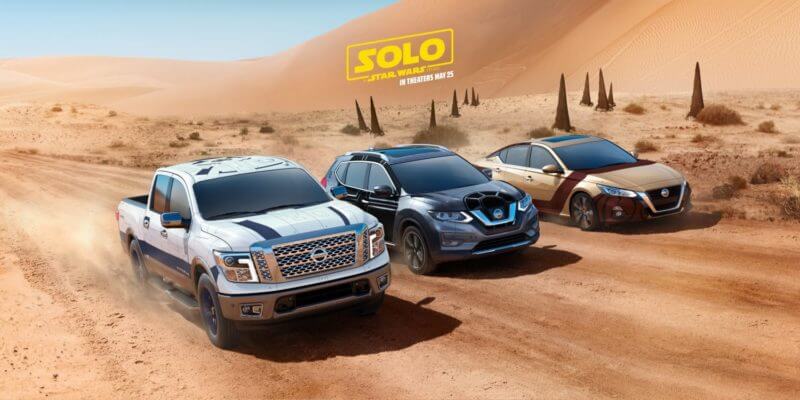 Three years ago, Nissan‘s vice president of marketing communications Jeremy Tucker read a news article about Lucasfilm‘s then-upcoming new movie “Rogue One: A Star Wars Story” and was immediately struck by the similarity between the name of the film and the Nissan Rogue model of compact SUV. Cross-brand synergy seemed like a no-brainer, and Tucker (with the help of his hard-working team) set about establishing a beyond-successful relationship with Lucasfilm that lasted through “Rogue One,” on to last December’s “Star Wars: The Last Jedi,” and then arriving this month to the new standalone spinoff movie “Solo: A Star Wars Story.”

In celebration of this trilogy of collaboration and the arrival of an appealing new “Star Wars”-themed Nissan marketing campaign and show vehicle engineered to tie in with “Solo,” the company invited me on a three-day nonstop media tour of Lucasfilm locations and events in both Northern and Southern California. In previous years, Inside the Magic’s founder and former Editor-in-Chief Ricky Brigante had taken these trips, so it was an honor to be selected to fill in for him in his recent departure from the site.

Checking into the hotel for #NissanAndStarWars. Then it’s off to Lucasfilm headquarters here in San Francisco! #SoloAStarWarsStory pic.twitter.com/xNNWV80zD1

This week’s event began in San Francisco, where select media assembled in a hotel in the historic Nob Hill area before heading out for our first day of adventures.

And of course, where better to begin a “Star Wars”-centric week than at the place where the magic happens: Lucasfilm’s current headquarters in San Francisco’s Presidio park area.

Lucasfilm’s lobby is adorned with costumes and droids from many of the “Star Wars” movies, making it the unmistakable home of the company that generates some of the most popular content in mass culture. We were given a thorough a fascinating tour through the halls of Industrial Light & Magic, the company’s visual effects arm, and saw countless artifacts from the hundreds upon hundreds of famous movies ILM has contributed to through the decades.

After our visit to Lucasfilm, the group was treated to a whiskey class and buffet-style dinner at one of San Francisco’s classiest speakeasy-style lounges, Bourbon and Branch. The food and drink were overwhelmingly excellent.

The next day we set out for the Los Angeles area, traveling by chartered plane to Burbank, where we settled in at a closed-course test-driving space nestled in a former shopping center parking lot. There, we had the opportunity to try out some of Nissan’s higher-end models such as the very sporty GT-R.

Going to be test driving some nice @NissanUSA cars around a closed course in North Hollywood. Should be fun! #NissanAndStarWars #SoloAStarWarsStory pic.twitter.com/gG936861je

In addition to driving around ourselves, we also sat in as passengers for “hot laps” with trained stunt drivers.

Video riding as a passenger in a @Nissan 370z Nismo with a stunt driver. White-knuckle excitement! #NissanAndStarWars #SoloAStarWarsStory pic.twitter.com/5OVtJIK0hV

Our hosts were Hollywood stunt drivers Rich Rutherford and Greg Tracy, whose filmographies include a long list of action-packed movies and dozens of car commercials.

Rutherford and Tracy then took to the track to show off some of the more dangerous moves by themselves.

After wrapping up at the driving course, our group was handed keys to an assortment of Nissan vehicles and guided through Hollywood’s scenic Mulholland Drive route down to our next destination.

Driving through the Hollywood Hills in this @NissanUSA 370z on our way to more #SoloAStarWarsStory fun. #NissanAndStarWars pic.twitter.com/6xztHxOzpd

The following two days would be spent on Hollywood Boulevard, and when we arrived Disney’s construction crews were already setting up for the “Solo: A Star Wars Story” world premiere.

The Millennium Falcon is being erected on Hollywood Boulevard for the world premiere of #SoloAStarWarsStory tomorrow evening. #NissanAndStarWars pic.twitter.com/QZXnx71jKG

That night we gathered at the distinguished steampunk-themed nightclub The Edison in Downtown Los Angeles, where we enjoyed drinks, snacks, and magic from the pub’s incredibly talented house illusionist.

Thursday’s arrival meant it was time for our main event: the world premiere of “Solo: A Star Wars Story.” But first, we assembled in the bar of our hotel for a presentation by Jeremy Tucker, recapping Nissan’s relationship with Lucasfilm.


The informative talk was punctuated by the reveal of two new custom-designed model cars inspired by the friendship between Han Solo and Chewbacca in the movie.


And then we were escorted out to the still-under-construction red carpet area for the premiere, where we were given a first look at the all-new Millennium-Falcon-themed Nissan Rogue vehicle on display to all attendees for that night’s event.


Prior to the start of the premiere itself, we visited Sweeney Todd’s barber shop in Los Feliz to get gussied up for the big night.

Then the moment finally arrived: we strolled onto the red carpet for “Solo: A Star Wars Story,” surrounded by celebrities and flanked by fans and onlookers down the length of Hollywood Boulevard.

Of course we had to stop by and say “hello” to our new friend, the Millennium Falcon Nissan Rogue.

Along the way on the red carpet, “Star Wars” creator George Lucas walked right past us. I managed to snap a quick photo of him posing with friend and screenwriter Lawrence Kasdan.

Finally, we were ushered into the theater to be in the first audience to ever see “Solo: A Star Wars Story.” I’d tell you more about it, but my review is under embargo until next week!

All-told, it was an exhausting and exhilarating trip spent experiencing all that Nissan and Star Wars have to offer. I couldn’t have been more thrilled to be included, and it was a real treat getting to try out some of Nissan’s cars before enjoying “Solo: A Star Wars Story” with a crowd full of the people who brought it to life on the big screen.

Such a great experience attending the #SoloAStarWarsStory premiere last night. Full review of the movie coming next week! #NissanAndStarWars pic.twitter.com/inOFugKEpq

“Solo: A Star Wars Story” will be released into theaters nationwide on Friday, May 25th. For more information about Nissan’s relationship with Star Wars, be sure to visit the company’s official website.