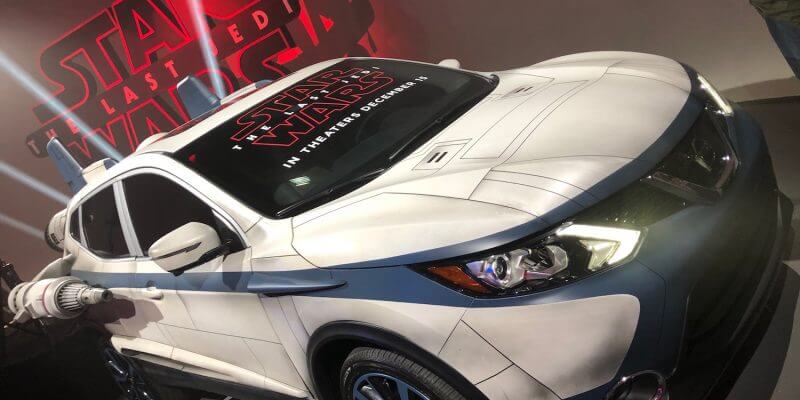 When reps from Nissan told me their newest vehicles feature technology akin to R2-D2 helping Luke Skywalker pilot his X-Wing through the Death Star trench run, I thought they were mad. But after spending two days driving Nissan cars equipped with the new ProPilot Assist technology, I almost believe it.

To make a big impression, Nissan flew me out to Los Angeles for two days of driving around the city in their vehicles, utilizing the ProPilot system as much as possible. And to keep Star Wars in mind the whole time, they offered a series of stops around LA that included lightsaber training at a martial arts studio (amazingly fun), a hunt for droids at the Griffith Observatory and other famous LA locales, and a slide on the dizzying SkySpace attraction 70 stories up. It all culminated with a walk of the Nissan-sponsored red carpet to the El Capitan Theatre for opening night of “The Last Jedi.” When Nissan says their cars are inspired by Star Wars, they aren’t kidding, as they now have a whole fleet of one-of-a-kind custom vehicles. But back to the tech they were showing off.

Let’s get one important note out of the way first. Self-driving cars are not here yet. While Artoo may be able to take over piloting Luke’s star fighter, no droid can fully autonomously navigate the real world’s unpredictable roads just yet. But car technology is slowly making its way there with new advancements every year. While some companies are chipping away with small scale tests at autonomous vehicles, Nissan is already rolling out a version of this tech in its Rogue and Leaf cars, allowing drivers to give over a little bit of control to the vehicle itself. And experiencing it for the first time, I can feel the future within my grasp. ProPilot Assist is an assistive technology. It’s a high-tech version of cruise control that allows setting much more than a vehicle’s speed. While it is an impressive feat of engineering behind the scenes, what it does essentially boils down to two rather simple concepts.

First, when enabled by easily tapping a couple buttons on the steering wheel, it enables multiple front-facing cameras to capture all kinds of data in realtime about the world ahead of the moving vehicle. Most importantly, it detects the car immediately in front of you, determining distance and speed, constantly updating with every move.

This literally means you can take your foot off the gas pedal, just like with cruise control, but you also don’t have to brake. Simply setting the maximum speed you wish to travel, it does the rest. If there’s no car in front of you, it’ll speed up and get you to that max speed. But if a car appears ahead, it will slow down, keeping a safe (and customizable) distance that it will maintain. If that car speeds up, it’ll speed up automatically. If that car slows down – even rapidly – it will automatically brake quite elegantly and smoothly. Second, the cameras also search for lane lines on each side of the car. When present, the ProPilot system attempts to keep the vehicle in the center of the lane at all times, even when going around curves. The driver has to pay attention and keep hands on the wheel, but only lightly, just to show that you’re still awake and aware. Again, it’s not self-driving – but it is close.

With minimal attention, you can let the car do most of the work, navigating the lanes while also setting appropriate speed and braking when needed. When ProPilot works, it’s incredibly impressive and definitely evokes a feeling of having a Star Wars droid in control of the vehicle.

Unfortunately, it’s not perfect. Lane lines are inconsistent on roads everywhere and sometimes it loses track of them, requiring the driver to jump back in control. Likewise, when a car unexpectedly cuts you off, the system is a bit slow to react, often causing a few heart palpitations before it finally decides to brake. So awareness is crucial as a reality check when using this system.

It takes a few drives to get used to ProPilot, whether on the super popular Rogue SUV or the ultra high-tech electric Leaf vehicle (which is mighty fun to drive). It takes time to decide how much trust you’re willing to give over to this system and allow it to take control of the car. But once you feel confident in it, it’s a wonderfully freeing feeling. And it’s particularly useful in heavy traffic, as it handles all the stop-go action completely for you.

ProPilot Assist isn’t a technology that would make me immediately run out and buy a new car just to have it. But I did find myself missing it when I returned home, sitting in traffic, wishing my old car could navigate the stop-and-go highway on its own, like the Rogue and Leaf had done back in Los Angeles. I was surprised how used to the technology I had become in just a couple days’ time.

So, when I am in the market for a new car some day, I will definitely be looking in Nissan’s direction, channeling my inner Luke Skywalker with the hope that the car will respond when I yell out, “Artoo! Jump to light speed!”