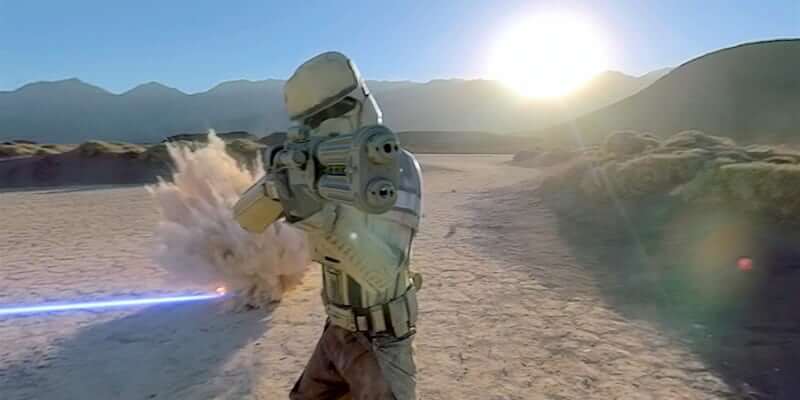 From the X-Wing to the TIE Fighter, the “Star Wars” saga is filled with a seemingly endless list of iconic modes of transportation. But there’s one vehicle surprisingly taking the interstellar spotlight today: the Nissan Rogue.

Through a promotional partnership between Lucasfilm and Nissan, a new immersive experience called “Battle Test: A Nissan 360-Degree Virtual Reality Experience” debuts online today, now available as an impressive example of what the future of virtual reality holds.

It seemed a natural fit for the two companies to partner last year, as Lucasfilm prepared to debut its long-anticipated film “Rogue One: A Star Wars Story” while Nissan continued to enjoy the success of its best-selling SUV, the Nissan Rogue.

Over a visit to San Francisco last week, I learned the details of how this endeavor became much more than simply producing a Nissan commercial set in the “Star Wars” universe, but a chance to figure out how to use existing technologies in new ways to tell a new “Star Wars” story in an exciting way. What began with an exciting commercial idea quickly escalated into a full-blown virtual experience like nothing Lucasfilm had ever created.

This was a project only a mere few months in the making. Something of this scale normally could take years of development, but Nissan pushed to act fast to move their idea forward and ride the success of “Rogue One.” It was originally Nissan’s idea, which Lucasfilm initially was hesitant to pursue. A Nissan car obviously does not instantly fit into the “Star Wars” universe.

But over many meetings and discussions with Lucasfilm’s effects and story teams, the idea of a “simulation” in which the Nissan Rogue was the star, flanked on all sides by intense intergalactic action became the best way to allow the Earth vehicle to seem to exist on another planet. For Nissan, the goal was to showcase the many safety features the Rogue has (Forward Emergency Braking with Pedestrian Detection, Blind Spot Warning, Around View Monitor with Moving Object Detection) in a manner that doesn’t put real-life drivers in harm’s way. A virtual reality experience seemed to be the perfect solution, allowing anyone to step into a world in which the danger feels real, but actually is not.

Nissan called upon the brains of Canadian experiential marketing design company Critical Mass to develop the interactive product. There, executive creative director Steve Savic helped lead the efforts to write the story and plan the real-life shoot that would ultimately become the “Battle Test” VR experience.

What would it take to make fans feel like they are in the center of a simulated battlefield from “Rogue One” while also experiencing Nissan’s Safety Shield technologies in a seamless way that didn’t interfere with the enjoyability of the video?

At Lucasfilm and over a few Nissan-hosted meals in San Francisco, Savic talked of the challenges Critical Mass faced in creating the most ambitious use of VR in the “Star Wars” universe to date. He wanted to remain faithful to the vast “Star Wars” world that fans have loved for decades, without forcing Nissan into the picture. He also wanted to capture the excitement of the film series in an authentic way.

Traditional storyboards wouldn’t cut it for this project, as this story needed to unfold in 360-degrees around the viewer. So the team at Critical Mass created 6-sided cubes, on which they drew story beats on each face when unfolded, allowing them to properly visualize and plan every movement along the way. The idea was to create a cohesive story that also offers re-watchability with multiple branches of action happening around the viewer at all times. The VR video begins outside the vehicle, instantly thrusting viewers into a battle between Stormtroopers and the Rebels. It was shot using the most advanced VR cameras available today – a relatively untested new 4K rig with additional cameras featuring narrower lenses than traditionally used for VR, to allow the action to feel closer to the viewer. Planning ensured that moments in which the viewer is addressed by characters happened directly into lenses, rather than on seams in which the video from the multi-camera rig would be stitched together, offering the highest photorealism available.

To push the authenticity, the live-action shoot featuring countless Stormtroopers and Rebels was performed across Mohave desert dunes, just minutes away from where scenes from “Return of the Jedi” were filmed. They used as many practical effects as possible, including a real Nissan Rogue vehicle for opening shots as well as on-set explosions and smoke.

Once production was complete, Critical Mass turned the footage over to Lucasfilm and Industrial Light & Magic. There, TIE Fighters, X-Wings, Star Destroyers, and Imperial Walkers were added along with laser blasts and enhancements to explosions. It all played out exactly as Savic’s team had storyboarded, save for one late addition from ILM’s effects team: the X-Wing / TIE Fighter explosion near the end of the video, which Savic highly praises as the one last exciting punch the piece needed.

Heading up the visual team at ILM was Hayden Landis, Associate VFX Supervisor (who also works on many of Disney’s theme park projects, including the recent Soarin’ Around the World). Landis noted that this was a particularly challenging project to work on given its short timeframe from concept to completion. Skywalker Sound was enlisted to develop the immersive audio soundtrack to the “Battle Test” experience, led by audio designer Kevin Bolen. Bolen said working on this 360 project allowed his team a chance to add layer upon layer of sound to make the visuals seem more enveloping. He likened the process to developing a surround soundtrack for a Dolby Atmos presentation of a film.

In addition to being able to watch the “Battle Test” experience, additional interaction is available on Nissan’s web site and in the Oculus version that hones in on the safety features being promoted for the Nissan Rogue. The “Battle Test” experience feels a lot like an immersive theme park ride, sponsored by Nissan. It’s not unheard of for one of Disney’s rides to feature sponsored content on board, such as the blatant OnStar plug that was added to Test Track at Epcot a few years ago. It is a bit unusual to virtually sit inside a Nissan Rogue while exciting “Star Wars” action plays out around you, but it’s all nicely tied together by the “simulation” story. Ultimately, this partnership proved to be a chance for Lucasfilm to dive deep into the 360 VR space, opening the doors for more similar content to come. For Nissan, the measure of success is in increased awareness of their popular Rogue vehicle. And that success has continued throughout the “Rogue One” promotion.

“Since the announcement of our relationship with Lucasfilm and the Star Wars brand last August, we’ve successfully improved awareness for the Nissan Rogue, and the Nissan brand too,” said Jeremy Tucker, vice president, Marketing Communications & Media, Nissan North America, Inc. “Rogue sales have made the jump to hyperspace, up nearly 50 percent in 2017 from this time last year, and we’re not planning on letting up anytime soon.”

Those looking to truly enjoy this corporate link-up to its fullest may want to take a look at Nissan’s limited edition “Rogue One” branded vehicles. Only 5,000 have been produced (2,500 of each color scheme, inspired by Stormtroopers and Death Troopers) and Nissan says they are selling well so far. Each one comes with a collectible Death Trooper helmet as a bonus. Later this year, the popular Rogue will also be joined by the Rogue Sport, a smaller, sportier version of the SUV.

(I’m not a car guy by any means, but I did thoroughly enjoy driving the Rogue across the Golden Gate Bridge and through San Francisco’s many winding streets, so take that for what you will.)

In addition to being viewable on YouTube and Facebook in 360, “Battle Test” is also available today on Oculus, Steam, Samsung VR, Discovery VR, Jaunt and Littlestar.

Check back to ITM soon for further excitement from San Francisco, as Nissan led a trip to Rancho Obi-Wan to marvel at the world’s largest “Star Wars” collection.

Comments Off on VIDEO: Lucasfilm goes rogue with Nissan to unveil a ‘most impressive’ new Star Wars 360 VR mini-movie