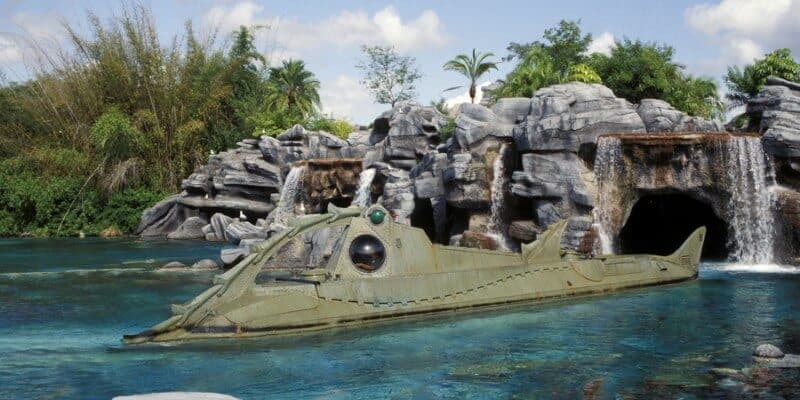 Verne’s vessel, however, was not the first to bear the name. As early as 1762, several naval vessels bore this infamous maritime moniker.  From first practical submersible to inaugural nuclear submarine, the name “Nautilus” transcends time itself.

As early as the 18th Century, “Nautilus” named sailing ships served Navies of Great Britain, Germany and the United States.

Jules Verne based his iconic incarnation upon an 1800, Robert Fulton invention of the same name. This small, hand cranked prop powered submergible carried a crew of two.  At 21 feet long, “Nautilus” was intended to bring balance to Britain’s mighty naval power by delivering destructive devices (“carcass” mines delivered into the target’s hull and then exploded). 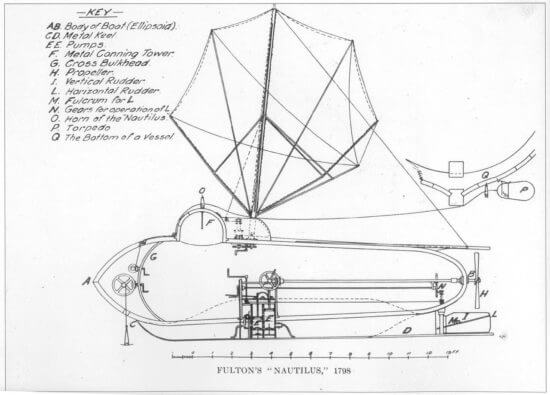 Other vessels to bear “Nautilus” on their hull include the Italian tanker torpedoed in 1942, a German cargo ship, several exploration ships.  In modern times, perhaps the most famous of these belonged to the United States Navy.

Launched in 1954, this first nuclear-powered submarine sailed the seas, submerged, until decommissioned on March 3, 1980. Named after Nemo’s fictional submarine, USS Nautilus is now on display as part of exhibits at Submarine Force Library and Museum (near US Navy Submarine Base New London, in Groton, CT.) 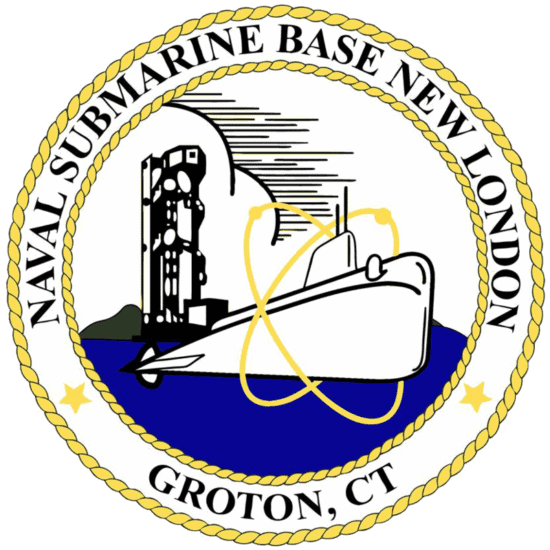 While this iconic craft carries with it an impressive “real world” history, Jules Verne’s fictional version remains most popular.  Written in 1870, “Twenty Thousand Leagues under the Sea” serves, not only as steampunk inspiration, but as a lesson of oceanic conservation.  Commanded by enigmatic Captain Nemo, “Nautilus” could easily be considered her own character. 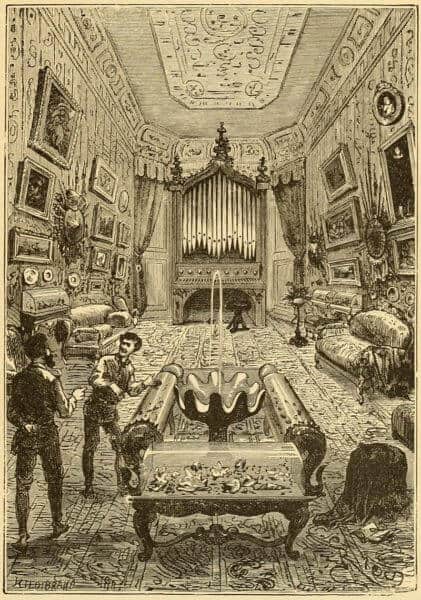 Cigar shaped and way ahead of its time (for its mid-19th century setting), this iconic submarine terrorized trade. Verne’s version included double hulled outer walls, further protected (as needed) by electricity from propulsion powering batteries.  “Nautilus” top speed of 50 knots along with 5-day submerged sustainability enabled easy evasion from sailing ships she preyed upon.  Because of these advanced abilities, she earned “sea monster” status from all who encountered her attacks. 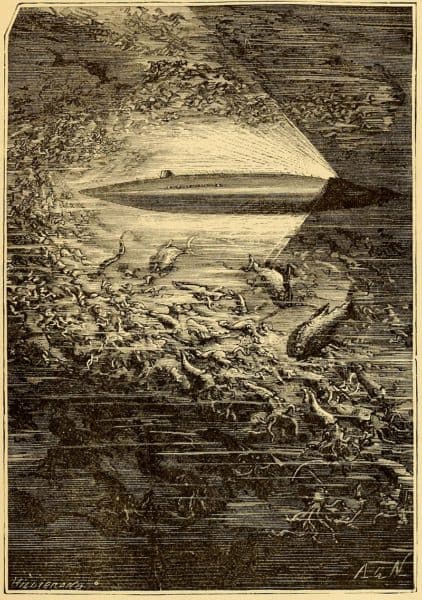 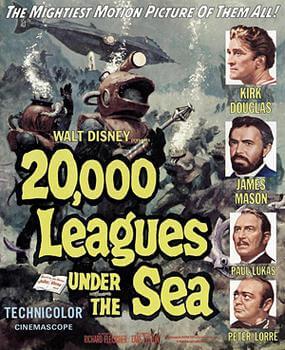 After meeting Walt Disney in 1951, Harper Goff left set design duties at Warner Bros. to work for Disney. Goff’s model making talents and set design experience were perfect training for his work on the Studio’s 1954 science fiction film: designing a new “Nautilus.” All aspects of this amazing submarine owe their existence to Goff. He not only crafted stunning exteriors, but also all interior sets for Nemo’s majestic monster.

Disneyland, in 1955, included a walk-through “20.000 Leagues under the Sea” experience.  This included several props from the motion picture.

Goff’s “Nautilus” would eventually be replicated into a fleet of famous under sea adventuring attraction vehicles.  Success of Disneyland’s Submarine Voyage expansion to Tomorrowland ensured a similar attraction arrived, in 1971 at Florida’s Magic Kingdom.  20,000 League under the Sea: Submarine Voyage delighted guests at Walt Disney World until its closure in 1994.

Disney’s “20,000 Leagues under the Sea” submarine, the “Nautilus,” not only lives on as an attraction in Paris and Tokyo, but also has appeared as amazing artwork and small-scale statues. 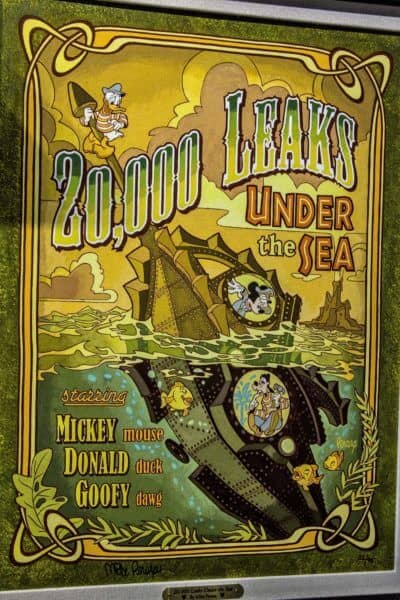 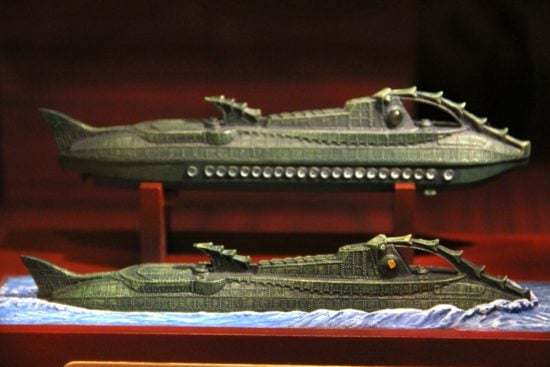 Movie version models have appeared in historic tribute as part of “One Man’s Dream” at Disney’s Hollywood Studios theme park in Florida. 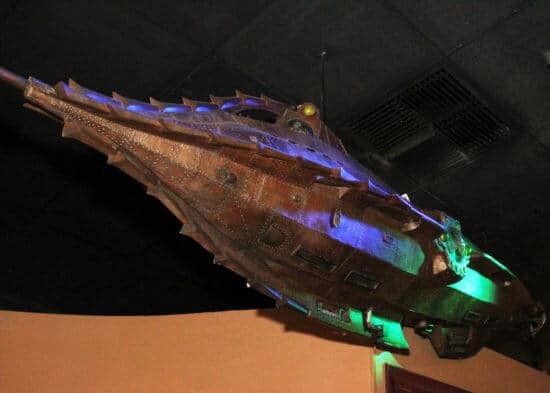 French film, “20,000 Leagues under the Sea” (1907) and Indian silent movie of the same name (1916) appear to be the earliest adaptation of Verne’s submarine visualization. “Nautilus” made its way into additional motion pictures on several occasions. Silent film 1954 saw a follow up film, “Return of Captain Nemo.” 1969’s “Captain Nemo and the Underwater City” saw a pair of sting ray shaped submarines.

Fans of Disney’s “Nautilus” will have the opportunity to meet master model builder Scott Brodeen:

“Scott Brodeen is a professional model and prop fabricator, restorer, and creator of most all of the commercially available Nautilus Submarine models from Walt Disney’s renowned classic movie, 20,000 Leagues Under the Sea. From the total number of rivets, to the lore surrounding Captain Nemo’s great pipe organ, Scott Brodeen’s love for science fiction was born out of his passionate research and collection of stories about this movie classic.” –Gaslight Steampunk Expo 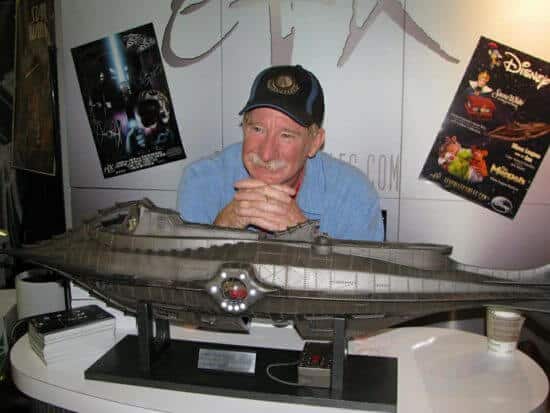 Jules Verne’s “Nautilus” may have made many movie appearances over the years, however, its Goff’s Disney movie design which seems to be the most well recognized.  Credited with starting today’s steampunk sensation, Goff’s vision for this splendid submarine has not only inspired the genre, it also stands the test of time as one of Disney’s most memorable movie to attraction vehicles.