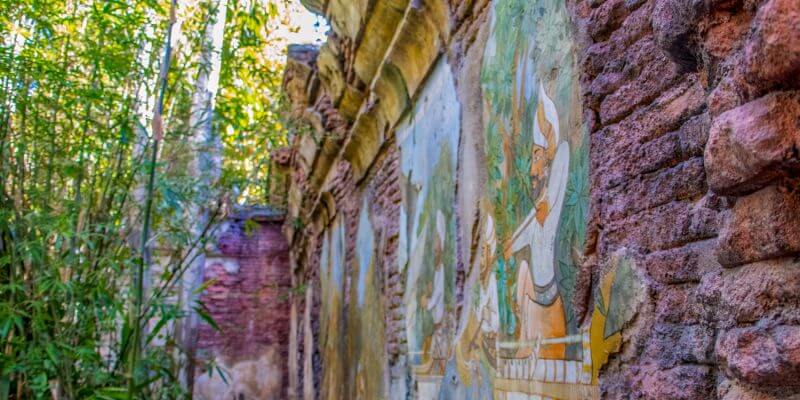 Walt Disney World, in Florida, has four fun-filled theme parks, and a pair of water parks to entice and entertain visitors.  Among the amazing attractions are several more relaxing, motion free finds.

These static encounters provide a place to pause, relax and enjoy an immersive environment while catching one’s breath.  Just as detailed and delightful as the thrills offered by other rides, these non-motion marvels are a great way to “stop and smell the roses.”  Listed below are my favorite five.

A country comedic music review with fur filled fun, Country Bear Jamboree and its holiday overlays will always appeal to my inner child. One of the Magic Kingdom’s original opening attractions, this happy hoe-down has a nostalgic appeal to me as I was fortunate to have been able to enjoy this experience as a park guest from the first year it opened.

Though the attraction has undergone some recent improvements, the American Adventure and its museum-style displays is the modern counterpart to Hall of Presidents.  With advanced animatronics and a more engaging storyline, American Adventure showcases the country’s passionate history while striking a difficult-to-reach (in today’s times) patriotic core in me.

I’ve been a fan of Jim Henson’s felt-covered fiends since childhood (“Sesame Street” and the original “Muppet Show”). Muppet Vision 3D retains much of Henson’s whimsical wonder and clever comedy.  Though not a fan of the computer generated “spirit of 3D”, seeing life-sized Muppets (Sweetums, Waldorf and Statler) come to life and the show’s explosive finale make up for the annoying Waldo C. Graphic.

The impressive imagery of all of Disney’s Circle-Vision experiences has always mesmerized me. From the original adventures in Tomorrowland to Epcot’s three fantastic films (located in Canada, China, and France), the ability to be immersed within the action and travel to exotic lands all while standing in much appreciated air-conditioned environments is a great way to catch a breather and be amazed while visiting the theme parks. Impressions de France takes top billing in these pleasing projected attractions because of perfectly paired and captivating score. Every time I hear “The Carnival of the Animals: The Aquarium,” one of my favorite pieces of classical music, I am reminded of  EPCOT and the French pavilion.

As an aspiring photographer, the wildlife at Disney’s Animal Kingdom is a superb shutterbug subject. The two trails trot out dozens of the Earth’s delightful denizens. As Asia’s Maharajah Jungle trek includes realistic, artistic ruins as well as both bats and tigers, two stunningly gorgeous creatures, this “not a zoo” attraction takes the top spot in my static selections of Walt Disney World favored attractions. While action and exciting adventure is great draw for visiting the attractions at Walt Disney World’s four Florida theme parks, sometimes the relaxing, motion free experiences are worth enjoying.  Of those simple pleasures, the five listed above hold a happy place in my heart whenever I have the privilege of perusing the parks.