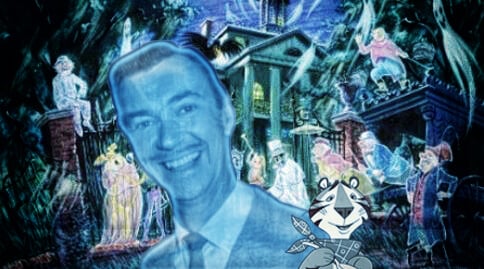 A long time ago in a much different world, droids, wookiees and villains blasted their way onto the silver screen, variety and talk show circuit.  As “Star Wars” grew in popularity, celebrities flocked to the Force.  Variety shows featured star studded casts for space saga specials.

On several occasions, not all of the leading talent appeared together at the same time. Such was the case with the Donnie and Marie (Osmond) show.  Thus, a future Disney Legend was tapped to voice Darth Vader.  Of course this is not all Thurl Ravenscroft is famous for . . . 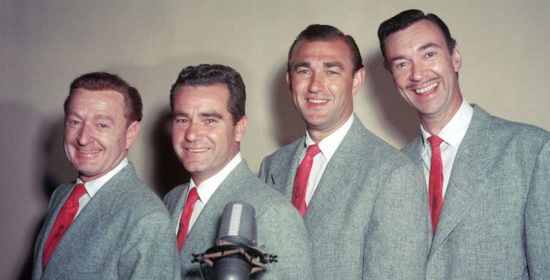 Thurl Ravenscroft was also an accomplished vocalist on his own.  His cover of “Mr. Bass Man” (with the Andrews Sisters) and his album “Great Hymns in Story and Song” provide a pair of perfect examples of the many records produced. Spike Jones and his City Slickers (the Weird Al of big band music) featured Ravenscroft in his Halloween hit “I Was Teen Age Brain Surgeon.”

Another notable role included several songs the Rankin-Bass animated production of “The Hobbit.”

Walt Disney relied on the Mellomen’s talents for films like “Pinocchio” (thought the “Honest John” song was eventually cut from the animated feature), “Alice and Wonderland,” and “The Jungle Book.”

To the delight of all involved, the vocal group was also called upon to provide animal noises in several of Disney’s animated features.  Perhaps the best example appears in “Lady and the Tramp.” The men superbly sing the blues, as dogs, performing a touching cover of “Home Sweet Home.”

“The most fun we ever had was singing barbershop for Tramp and the other dogs. Walt wanted the dogs to sing ‘Home Sweet Home’ from their prison cell—a kennel. But we had to sound like dogs, not people singing like dogs.” – Thurl Ravenscroft (via D23)

It should be noted, performing for Disney with the Mellomen only covers a very small part of Thurl Ravenscroft’s contributions to the Walt Disney Company.  Mr. Ravenscroft can also be heard on several Disneyland Records.  These include audio versions of Pirates of the Caribbean (an album for which he also recorded several sea chanteys) and a delightfully dark version of “The Headless Horseman.”

However, the most recognized recording involves a retirement home for ghosts.  Assuming the role of Narrator, Mr. Ravenscroft spins the tale of Ghost Host (Pete Renaday), Mike (Ron Howard) and Karen (Robie Lester) as they traverse the infamous Haunted Mansion (“Story and Song of the Haunted Mansion“)

Vinyl is not Thurl Ravenscroft’s only tie to Disney’s Haunted Mansion.  Leading the quintet as Uncle Theodore, his distinctly deep voice rings out over the other singing busts.  Other attractions featuring Thurl’s talents include The Enchanted Tiki Room (as Fritz and as Tangaroa), The Country Bear Jamboree (Buff the Bison), Disneyland Railroad (former narrator), Riverboat (first mate) and several voices in Pirates of the Caribbean (including the singing dog).

In honor of his many talented contributions to the company, Thurl Ravenscroft earned the status of Disney Legend in 1995. 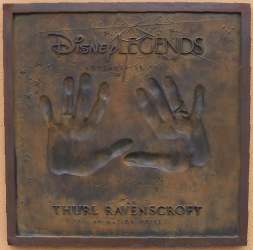 Though the majority of his voice work subsided in 1998, Mr. Ravenscroft would continue providing a voice for Tony the Tiger for seven more years, until his passing on May 22, 2005. At age 91, this gentle giant lost a battle with cancer.

While definitely not an exhaustive listing of the many amazing performances by Mr. Ravenscroft, these memories provide perfect examples of his many talents.  An oversized organ, as part of the interactive queue at Walt Disney World’s Haunted Mansion, pays tribute to Thurl’s contributions for the dark ride. 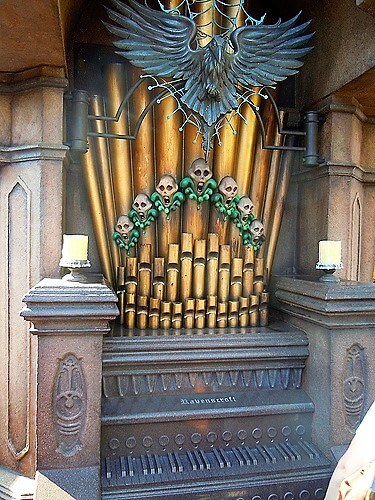 Comments Off on Darth Vader’s Other Voice: The many talents of Disney Legend Thurl Ravenscroft