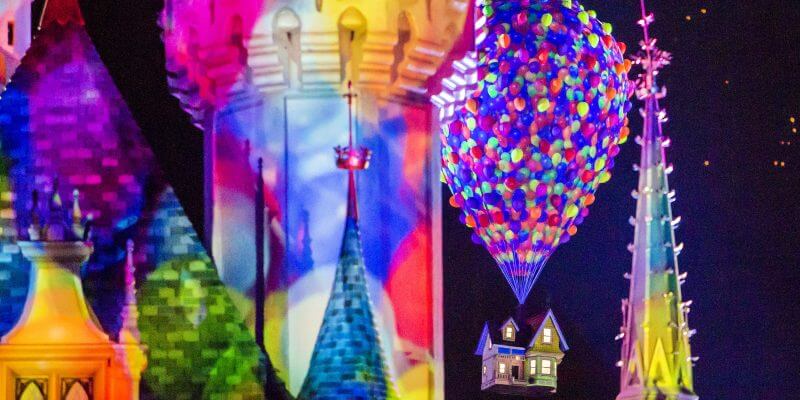 Among the many exciting exciting new experiences coming to Disneyland Resort for the new Pixar Fest celebration beginning this spring, the all-new “Together Forever: A Pixar Nighttime Spectacular” fireworks show may be the most highly-anticipated. Disney describes it as “a heartwarming story that celebrates the theme of friendship, an ever-present concept in Pixar animation, connecting guests with characters they’ve come to know and love.”

Today Disneyland revealed some new images and video from the performance, including an exciting confirmation of the rumored “Up” house flying over Sleeping Beauty Castle, and a still from the lively “Coco” sequence in the presentation. The projection-mapping for “Together Forever” will be viewable on the castle, the Rivers of America water screens, the It’s a Small World facade, and on Main Street USA.

WATCH PREVIEW OF “TOGETHER FOREVER – A PIXAR NIGHTTIME SPECTACULAR” AT DISNEYLAND:

I had the opportunity to see a preview rehearsal performance of “Together Forever” this past weekend during the Pixar in the Parks media event at Disneyland Resort, and I can say it definitely ranks among my absolute favorite Disneyland fireworks shows. Some of the effects in this showcase are indeed incredible, and I can say without hyperbole that my breath was taken away more than a few times.

“Together Forever: A Pixar Nighttime Spectacular” debuts Friday, April 13th with the launch of Pixar Fest at Disneyland in Anaheim, California.

Comments Off on New “Up,” “Coco” sequences revealed for “Together Forever” fireworks show during Pixar Fest at Disneyland