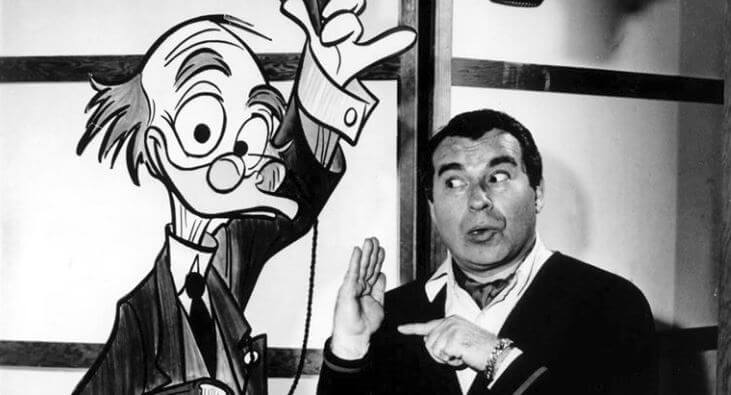 “Welcome, foolish mortals, to the Haunted Mansion.”  The voice behind that well-recognized message belongs to the amazing Paul Frees.  From Ludwig von Drake to Great Moments with Mr. Lincoln, this versatile voice actor added character to many Disney attractions, movies and cartoons.

In addition to voice overs for Disney, Paul provided Poppin’ Fresh, the Pillsbury Dough boy a voice as he did with dozens of cartoons, movies and television shows. Vaudeville gave Mr. Frees his start and the opportunity to perfect his talent for impressions before his voice talents were recognized in the realm of radio in the 1940s for various audio dramas. Voice over work kept Frees busy for the following two decades.  His pitch perfect impressions even had him re-dub lines in Humphry Bogart’s final film as Bogart was too soft spoken to be heard due a battle with throat cancer.

In addition to attraction voices (Adventure Thru Inner Space, Pirates of the Caribbean, Haunted Mansion and Great Moments with Mr. Lincoln) for the Walt Disney Company, Mr. Frees’ well recognized voice can be heard in 25 episodes of “Walt Disney’s Wonderful World of Color,” better known as Ludwig Von Drake.  Other Disney appearances include “The Shaggy Dog” and “The Absent Minded Professor.”

In addition to roles and voice work for Disney, Mr. Frees enjoyed on screen time in feature films. Paul portrayed a reporter in “The War of the Worlds,” (1953), and a priest in “The Thing from Another World.”

However, the value of his voice, especially his narration skills, is more prolific. Films like “The Manchurian Candidate,” “The World’s Greatest Sinner” (also the voice of Satan), “Doc Savage,” “The Disorderly Orderly,” and “Beneath the Planet of the Apes,” and the “Star Wars” spoof “Hardware Wars,” are examples of his narration talents.

Paul Frees’ voice can also be heard as the Cyclops in the film of the same name, “Earth vs. the Flying Saucers” gave him the opportunity to mimic Orson Welles,  and as a crab in “The Incredible Mr. Limpet.”

On the small screen, in addition to narrating several television shows (“I Dream of Jeannie” first episode, “Mister Terrific,” and “Steve Canyon”), Paul Frees was the voice K.I.T.T.s nemesis KARR.

Paul Frees portrayed Peter Lorre perfectly. His fine crafted talents of impersonation were used to give Spike Jones and the City Slickers a Peter Lorre-like hilarious hot aside in the single “My Old Flame.”

His own album, “Paul Frees and the Poster People” became a showcase for several voice impressions. “The Look of Love” received a Boris Karloff treatment, “Games People Play” sounded a lot like Bella Lugosi, Humphry Bogart seems to sing “Raindrops Keep Fallin’” and the Peter Lorre style cover of “Hey Jude” are a few voices featured on the LP.

Animation is where Paul Frees truly flourished.  In addition to being the voice of Ludwig Von Drake, and (one time) as Donald Duck, for Disney; Mr. Frees found fame as Boris Badenov (“The Rocky and Bullwinkle Show”), Inspector Fenwick (“Dudley Do-Right”) for Jay Ward Productions.

Other cartoon capers include several voices for Mr. Magoo cartoons, several monsters in “Halloween is Grinch Night,” (uncredited) and several Pink Panther cartoons are graced with his voice. Ben Grimm/The Thing was voiced by Mr. Frees in the 1967-68 cartoon series “Fantastic Four.” Animated series, “the Osmonds” and “Jackson 5ive” feature characters voiced by Paul Frees as well as the “The Beatles” (as John Lennon/George Harrison).

Mr. Frees passed away on November 2, 1986.  He was honored as a Disney Legend on October 9, 2006.  Paul Frees’ crazy characters and smooth narration showcase a forty year legacy of Titanic talent.  Of all those voices, the Ghost Host, disembodied narrator of Disney’s Haunted Mansion, will happily haunt forever as a testament to the true spirit of this man of a thousand voices.