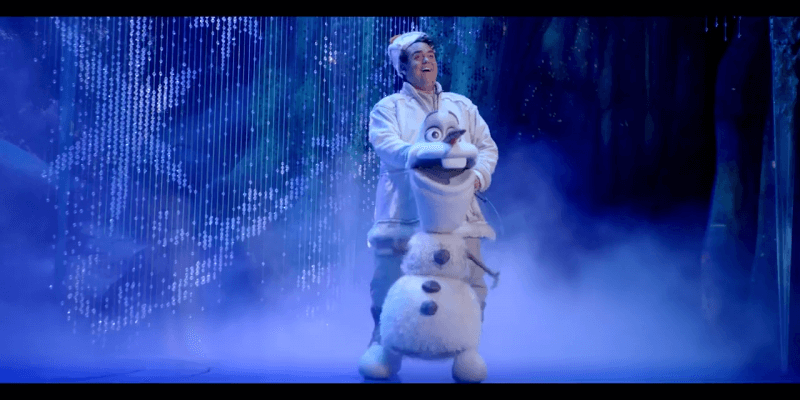 Disney’s “Frozen” is a story about sisters Elsa and Anna, but snowman Olaf proved to be quite the scene-stealer in the 2013 animated feature. For the new musical on Broadway, actor Greg Hildreth was the top pick to bring Olaf to life on stage.

A graduate of Boston University and the London Academy of Dramatic Arts, Hildreth’s other Broadway credits include “Rodgers + Hammerstein’s Cinderella,” “Peter and the Starcatcher,” and “Bloody Bloody Andrew Jackson.” On television, he had a recurring role on “The Good Wife” and can also be seen on “The Americans” and “Royal Pains.”

Hildreth took time to chat with us about the new production of “Frozen” and shared details on how Broadway Olaf differs from Movie Olaf, his favorite moment from the show, and why “Frozen” on Broadway isn’t just for kids.

As a first-time puppeteer for “Frozen,” what has been the most surprising thing about inhabiting a character via puppetry?

I would say the most surprising thing is the balancing act of puppeteering in general. Olaf’s feet are attached to my feet. I’m manipulating his arms with my left hand and his mouth, eyes, and eyebrows with my right hand. Also, as an actor, I am fully visible. At times, it feels like patting my head and rubbing my stomach. I find, though, that the more committed I am as an actor, the more alive and committed the puppet seems to be. My energy directly transfers to him.

How is Broadway Olaf different from movie Olaf?

He’s also three dimensional in the way that Michael Curry (Puppet Designer), Michael Grandage (Director) and I have been working on him as a character. My training is in the classics and a lot of Grandage’s credits are Shakespeare plays at the Donmar Warehouse and in the West End. I really have connected to the idea that Olaf is a great Shakespearean clown. He’s Feste in “Twelfth Night.” He’s Touchstone in “As You Like It.” He sees things that nobody else sees and is able to ask questions that nobody else asks because of his clown status.

Also, in moments when I would get bogged down in rehearsal with the puppet or physical jokes/gags, Michael Grandage would simply remind me, “He’s just a little boy. Keep playing him as a little boy.” In that way, I hope that the Broadway Olaf might be more grounded.

What was the audition process like for this show? Do you remember finding out you’d landed the role?

Let me tell you that this never happens but I didn’t audition for this part. However, working on this show for almost two years with very little job security, every leg of the journey has felt like an audition. There has been a moment after every reading or workshop that we have done of, “Well that was great fun but it’s over. They’re definitely going to replace me.” I do remember after one particular lab, that Michael Grandage sent me an email saying that they’d like to offer me the part officially and I wept.

Without spoilers, can you describe your favorite moment in the show?

Of course! There is a dance number in the second act that the entire company (and Olaf!) are a part of. That is my favorite part of the show. Partially because it’s fun to dance with a puppet and partially because its something that the entire company is participating in. It reminds me of the reason why I started to do theatre in the first place: that feeling of community. 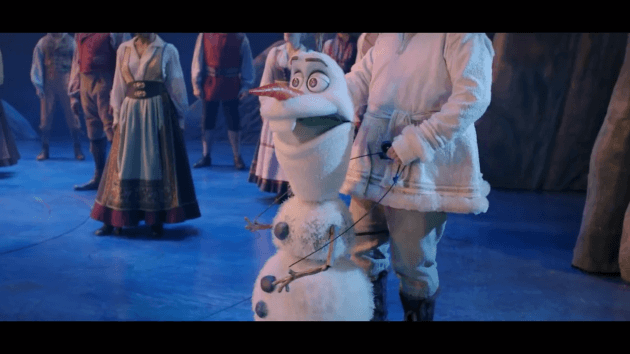 Hands down, Baloo in “The Jungle Book.”

I have only been to Walt Disney World once in fourth grade. I know, I know. I remember being a big Splash Mountain fan.

What’s one thing you want our readers to know about “Frozen” on Broadway?

I would like your readers to know that Frozen is not just a show for kids. The themes and motifs that you love from the movie have been hugely expanded and deepened by the creative team. Christopher Oram’s scenic and costume design are lush and grand and we’re playing with what I think is the best orchestra on Broadway. It’s a show about reconnecting and a love between two sisters. It’s a great show for adult siblings to come to together and look at each other afterward and say, “Why don’t we talk more?”

Disney’s “Frozen” is running now at the St. James Theatre in New York. You can read our review here, and to purchase tickets, head over to the official website.

Comments Off on INTERVIEW: “Frozen” on Broadway’s Greg Hildreth talks bringing Olaf from screen to stage