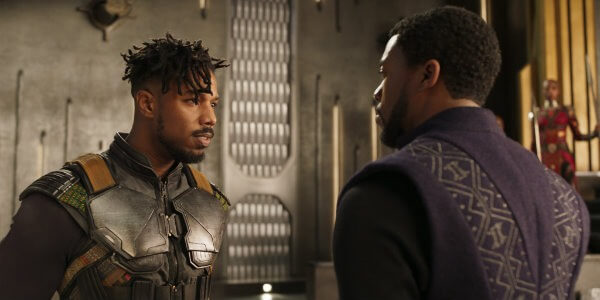 Marvel’s highly-anticipated blockbuster “Black Panther” is about to hit theaters, much to the delight of Marvel fans everywhere.

One of the most talked-about films in recent memory, “Black Panther” has garnered an overwhelming amount of buzz, with a great deal of it being directed at actor Michael B Jordan’s portrayal of the villainous Erik Killmonger.

Jordan’s performance certainly creates a very intriguing villain, but he is not the only classic nemesis of Black Panther in this film. It’s no secret that Andy Serkis revives his role as Ulysses Klaue in this movie, providing a secondary adversary to the King of Wakanda. However, a third major villain also appears in the film. M’Baku, also known as Man-Ape in the comics, serves as yet another enemy for T’Challa to deal with.

With all of these villains being crammed into one movie, the natural question is: who’s next?

Obviously, the next time we see Black Panther will be in “Avengers: Infinity War” in May, but it seems to be a safe bet that we will eventually see a second “Black Panther” title in the not-so-distant future.

So who will the Black Panther take on in his next solo outing? Here are three potential villains for a sequel to “Black Panther”:

Rather than bring in someone new, perhaps Marvel would prefer to use a villain who has already been established in the Marvel Cinematic Universe and even already has a history with Black Panther.

You may remember from “Captain America: Civil War,” Black Panther spoiled Zemo’s suicide attempt after the catalyst for the superhero showdown pitted Captain America and Iron Man against each other. T’Challa even mentions Zemo by name in “Black Panther.”

So why would Zemo return? As most Marvel heroes do, Black Panther has a bit of history with Hydra. Zemo could escape his prison, reconnect with what’s left of Hydra (cut off one head, two more take its place), and attempt to exact revenge on the King of Wakanda.

This would be interesting not only because it would give us our first look at the battle-ready Zemo we know from the comics, but it would also bring the murderer of King T’Chaka to Wakanda. You could bet some angry Wakandans would want some revenge of their own. Reports surfaced recently claiming “Black Panther” director Ryan Coogler wanted to include Kraven the Hunter in the first film. Aside from the fact that he is primarily a Spider-Man foe, Kraven would fit perfectly in this small section of the MCU.

Kraven prides himself on being the ultimate hunter, always searching for the most challenging target he can acquire. The Black Panther would certainly make one impressive trophy and the jungles of Wakanda would provide the perfect setting for a showdown between these two.

As for Spidey, don’t worry about him. The web-head has no shortage of enemies to appear in future movies. This one is definitely a long-shot, but the storyline is set up by the first post-credit scene from “Black Panther.” T’Challa announces that Wakanda will share their secrets and technology with the world. Obviously, this will drastically change the landscape of the MCU.

We’ll be seeing some of the incredible Wakandan technology across the entire world in future Marvel films, but what if Secretary of State Thaddeus “Thunderbolt” Ross doesn’t like the way Wakanda shares? What if the technology falls into the wrong hands, similarly to what happened with Stark Industries?

Ross is a military man, and would likely want some of this technology for military purposes. T’Challa would likely not agree with that, thus creating a conflict with Ross and the U.S. Government. Ross could bring an army to T’Challa’s doorstep and, if all else fails, he would have his secret weapon: the Red Hulk.

We’ve heard it is unlikely we will be seeing a solo Hulk movie in the future, so perhaps this villain shows up in a “Black Panther” film instead, maybe with the Hulk teaming up with the King of Wakanda.

Who would you like to see as the villain in a “Black Panther” sequel? Let us know in the comments below!

Comments Off on Who’s next? 3 potential villains for a “Black Panther” sequel