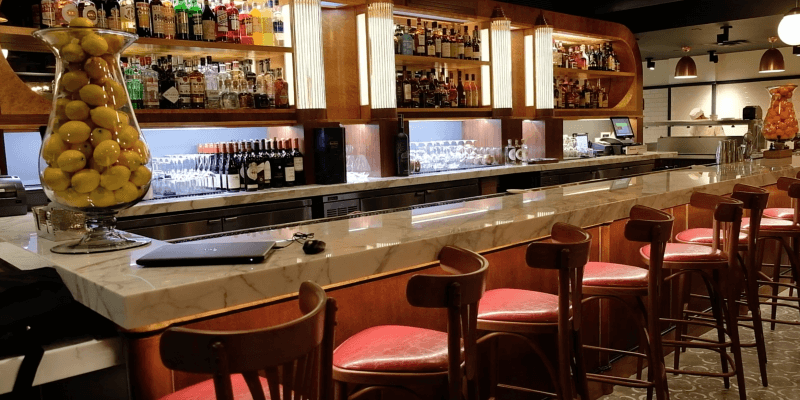 Disney Springs has recently debuted its newest Italian eatery, Maria & Enzo’s, which follows the story of an Italian couple who wanted to introduce Italian cuisine to the town folk of the bustling Disney Springs. Well upon arrival, Enzo also discovered a hidden underground tunnel that was once a prohibition-era hideaway, which he transformed into a stunning subsurface restaurant where guests can dine and socialize. The backstory tells the tale of Enzo and Maria discovering a long-hidden cavern below the terminal that connected to abandoned sections of the next-door power plant (which today is called The Edison). To Enzo’s astonishment, he came across a Prohibition-era hideaway where a team of flying rum-runners once gathered. Evidence of smuggler activity was everywhere, untouched for decades. Bottles and casks of rum were found along with a roster of flying operatives and their code names. It was a fascinating glimpse at an unknown chapter of the town’s past. Enzo shared his discovery with the local historical society and also decided that the space might make an irresistible spot for dining and socializing. Now it is a cozy gem of a hideaway for Enzo to highlight the family recipes he grew up on, featuring specialties from Rome and nearby regions.

This scenic underground bar and restaurant features 1930s inspired furnishings and actual graffiti on the walls. For a closer look at this new restaurant’s scenic interior, check out the pictures below or refer to the video above. The restaurant serves specialty cocktails and Roman inspired dishes, such as the city’s legendary Bucatini alla Carbonara (hollow spaghetti with creamy egg and pancetta sauce) and Tonnarelli Cacio e Pepe (square-cut spaghetti with pecorino and black pepper). In honor of the weekly dinners Enzo hosted for family and friends, the tunnel bar hosts Sunday Supper, a family-style meal each week.

Enzo’s Hideaway Tunnel Bar is open from 11:30 a.m. to 1 a.m. daily. Are you excited to check out this awesome new bar?