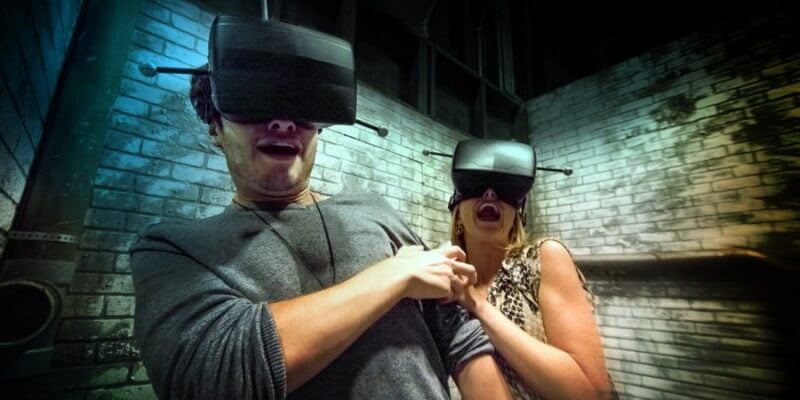 Some of the greatest minds behind Kraken Unleashed, Universal Studio’s The Repository and other popular VR experiences sat down at IAAPA 2017 to discuss the future of VR integration in major theme parks. Virtual Reality is an up and coming technology that has been slowly creeping its way into theme parks as just this past year China opened an entire theme park based completely on virtual reality experiences and games. As time progresses into the future of VR, theme park creators are still determining how great the influence of this technology will be within traditional theme parks.

To begin the panel, Banuelos started by explaining the difference between Virtual Reality, Augmented Reality and Mixed Reality. Virtual Reality is fully immersive and computer generated, similar to that of Oculus, the headset technology that transports you into another world. Augmented Reality is used to enhance the already physical world, similar to that of Snapchat face filters or Pokémon Go. Mixed reality is the merging of real and virtual worlds to produce new environments and visualizations where physical and digital objects co-exist and interact in real time, an example of this would be Microsoft’s HoloLens.

The three creators then went on to discuss VR as it currently is used within their own businesses. Morrow discussed the creation of Kraken Unleashed, specifically how no matter when you start you “will always be behind on the technology you use when your attraction actually comes out.” Morrow also went on to discuss Deep Sea Orca 360, which is a VR experience at SeaWorld San Diego that takes guests into the water with killer whales. He discussed its differences from Kraken Unleashed, specifically the difference in the number of people who experience the attraction in a single show or ride. Morrow had found when working on both experiences that generally the level of quality of an attraction can be dependent on how many people are experiencing your experience at once. Mannarino discussed Universal Studio’s Halloween Horror Nights attraction back in 2016, The Repository. Through the creation of the experience their design team had found that VR helps personalize an experience for guests. Attractions are hard to change as they are big expensive creations while VR is digital and can also be more fine tailored to the guest experiencing the experience. They’ve found that guests are generally more appreciative of a personalized VR experience and are more willing to no not only come back to experience the attraction again, but they will also “bring their friends.” When talking about The Repository, Mannarino mentioned that guests really enjoyed the fact that the experience was not strictly VR but also included immersive performances and puzzles that required group activities to solve.

They found that with Halloween Horror Nights guests like to attend in groups and wanted to continuously interact in groups throughout the event. When designing the VR portion of The Repository they specially made it so guests could see one another during the experience just so there would still be a social element to it. Banuelos discussed the importance of social media in regard to this up and coming digital medium. His company has found that participants in a VR experience want to share it across their social media with their friends. An Adidas event that dotdotdash had created an experience for in one night got 45 million impressions due to the fact that its participants were so eager and willing to share their time during the experience.

Another interesting fact that Banuelos touched on during his portion of the presentation was that as of now there is no universal understanding of interactions in VR experiences. He used the example of the smartphone to better explain this idea. Essentially, you have an understanding that certain gestures on your phone will cause for specific actions to happen. In VR this is not yet so and because of this as creators certain aspects of VR have not yet been explored or created yet. As an industry it is still growing and what is to come has not yet been determined, nor how much VR can become a part of a visitor’s experience when going to a theme park.

To see the full panel, be sure to click the video above. IAAPA 2017 will be taking place throughout the week so be sure to keep checking back for our latest coverage of the weeklong event.

Comments Off on VIDEO: The creators of Kraken Unleashed and Universal Studio’s The Repository discuss future of VR at IAAPA 2017