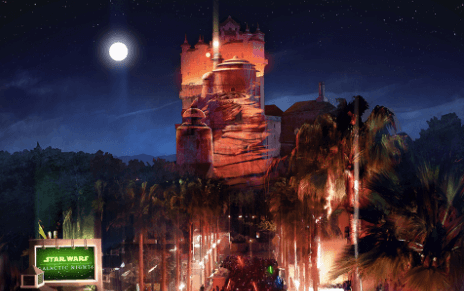 “Star Wars: The Last Jedi” is almost here, and that means we are drawing close to Star Wars Galactic Nights at Disney’s Hollywood Studios in Walt Disney World.

First, guests will get the chance to witness a stunning new projection show titled “Star Wars: Galactic Destinations,” in the Sunset Boulevard area of the park. State-of-the-art projection-mapping technology will transform the Hollywood Tower Hotel into several familiar locations across the galaxy. Favorite moments from the films, special effects, lighting and of course the iconic Star Wars score will make this show a stellar experience all evening long. Another exciting announcement for this year’s event, is the presence of Warwick Davis, who has played several roles throughout multiple Star Wars films, including a role in the upcoming “Star Wars: The Last Jedi.” The panel will give guests and inside look at the making of the new Star Wars-themed lands currently being built at Disney’s Hollywood Studios and Disneyland Park.

Finally, guests can also expect to see additional touches to existing attractions like Star Wars Launch Bay, Star Wars: Path of the Jedi and “Star Wars: A Galactic Spectacular,” based on “The Last Jedi.”