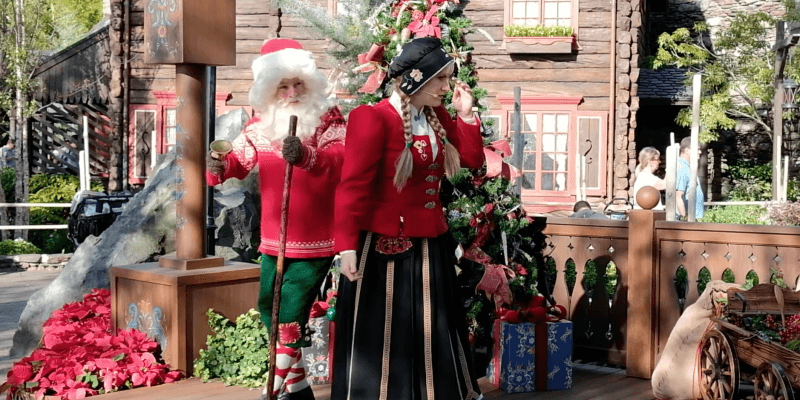 Epcot’s International Festival of the Holidays brings together Christmas celebrations and entertainment from around the world!

Walt Disney World’s Epcot is known for its 11 different country pavilions, all of which offer guests understanding and insight into the foreign lands and their culture. The holidays are no different as Epcot’s World Showcase is full of holiday merriment from each country, including musical productions, costumed performers and a vast amount of other cultural and religious-themed events.

One of the most famous and beloved Christmas themed celebrations of Walt Disney World’s Epcot is the Candlelight processionals.  This musical event presents the traditional story of Christmas with a celebrity narrator, a 50-piece orchestra, and a massed choir. The processional is performed three times per night (5:00, 6:45 and 8:15 p.m.) during the holiday season at the America Gardens Theatre.

This year’s event will include returning and new celebrity guests to narrate, as listed below.

Stacey Simons, Producer, Walt Disney World Entertainment, gave us an inside look at this year’s Candlelight processionals and what guests can look forward to for the musical event.

Epcot’s Festival of the Holidays also includes smaller performances by costumed performers. These take place in each of the pavilions around the World Showcase and are inspired by cultural customs and celebrations found within each country during the holidays. All of the shows are performed several times a day, making it easy for guests who are trying to see them all in one day.

Marsha Jackson-Randolph, Show Director, Walt Disney World Entertainment, discussed some of these new entertainment offerings coming to the World Showcase and their significance as it pertains to the theme of the international festival.

WATCH – INSIDE LOOK AT 2017 HOLIDAY ENTERTAINMENT AT EPCOT:

Here is a look at just a few of the many entertainment offerings happening around Epcot’s World Showcase during the Epcot International Festival of the Holidays.

El Mariachi Coco de Santa Cecilia is a live musical performance that takes place in the Mexico Pavilion and features music from the new Disney/Pixar film “Coco.” The performance doesn’t celebrate the Christmas holiday but it does bring light to Mexican culture, specifically the celebration of Dia de los Muertos. During the performance, members of the mariachi band discuss the meaning behind each song from the animated film and its cultural significance.

Sigrid Meets Julenissen the Christmas Gnome takes place in the Norway Pavilion and is a wonderful show that celebrates the season with some laughter. The story revolves around Sigrid, a storyteller trying to tell stories of Christmas when Julenissen, a magical and mischievous Christmas Gnome causes a ruckus and plays tricks on Sigrid. The show is lighthearted and full of funny jokes that will have the whole family laughing.

La Befana takes place in the Italy Pavilion and tells the tale of a kind-hearted witch who visits young sleeping children on the Eve of Epiphany. Guests who attend the street show will not only learn of the sweet story of the gift-giving witch, but also of her cultural significance to Italian culture. La Befana also interacts with young ones during the show, which makes the simple performance really interactive and engaging.

One of the more upbeat and harmonious performances in the World Showcase is Mostly Kosher. The small concert takes place between Morocco and France and really captures the joy of Hanukkah and Klezmer music. The performance starts with the band walking through the crowd while singing, playing their instruments and dancing in beat with their high-energy music. The indie band really captures the crowd throughout the performance by dancing with the crowd and sharing fun information about Hanukkah.

Of course, you cannot end a magical day at a Disney theme park without a special fireworks show. During the holidays and Epcot’s International Festival of the Holidays, IllumiNations: Reflections of Earth features a special holiday finale full of Christmas joy and music.

Epcot’s International Festival of the Holidays will be taking place at Epcot between November 19 and December 30, 2017. The El Mariachi Coco de Santa Cecilia show will be at the park until January 6, 2018. For more information about the festival, be sure to visit the official website.