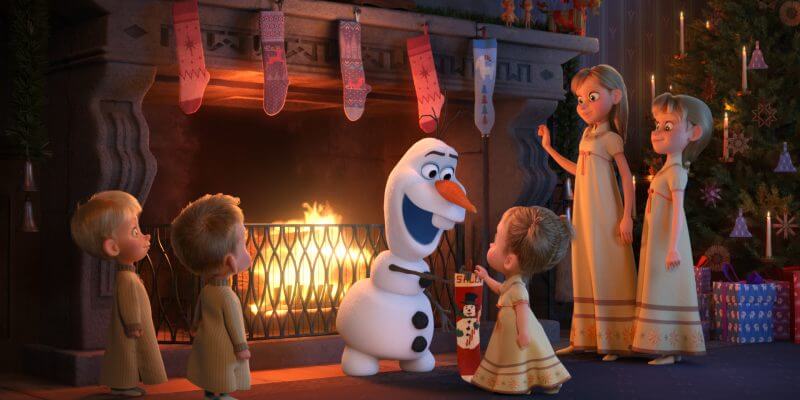 Over the Thanksgiving holiday weekend, American Pixar fans lined up at theaters around to country to see the animation studio’s latest masterful feature “Coco,” helping the movie rack up a robust $71 million across its first five days at the box office. But there’s one sticking point that’s keeping “Coco” from being an unqualified success– people are voicing strong negative reactions to the Disney featurette “Olaf’s Frozen Adventure” that plays before the main attraction.

Related: VIDEO: “Olaf’s Frozen Adventure” gets the “As Told By Emoji” treatment just in time for the holidays

While most of the complaints have been in reference to the piece’s length, others have cited cultural insensitivity or simply dissatisfaction with the quality of the storytelling or songs in comparison to the movie that follows it.

When I first saw the Olaf short over a month ago, it was shown separately from “Coco” at its own media event and was rather warmly received. In my write-up of the Q&A with the creative team and voice actor Josh Gad after the screening, I even said I was “delighted by its energetic animation, catchy original tunes, and heartwarming story.”

So why are general audiences rejecting “Olaf’s Frozen Adventure” now that it’s been paired with the highly-acclaimed “Coco” and both are playing together in theaters nationwide? I’ve got a few theories.

For the past two decades, (starting with “A Bug’s Life” in 1998) Pixar films have had a roughly five-minute-long Pixar-developed animated short attached to them. That’s over fifteen examples of very popular movies setting a standard to which fans have happily grown accustomed. In fact, “Coco” marks the very first time a non-Pixar short has played in front of a Pixar feature.

As if that weren’t enough of a change from what’s come before, “Olaf’s Frozen Adventure” (originally designed as a made-for-TV holiday special) runs a whopping twenty-one minutes long. That length is testing audience members’ patience and having them check their Apple Watches as they wait for the actual movie to start. Some theaters have even reported folks who have come out confused they may be in the wrong showing. That’s probably the first indication that “Olaf” hasn’t found the right home. It may be the highest-grossing animated feature of all time, but let’s face it, “Frozen” isn’t for everyone. The backlash against Olaf and friends has been going strong since the original movie became a surprise smash hit in 2013, and all signs point to it continuing through to when the official sequel “Frozen 2” finally sees the light of day two years from now. And while the two usually have some crossover appeal, Pixar fans aren’t automatically on board for everything coming out of its sister studio at Disney Animation.

If you already hate “Frozen,” chances are you’re not going to like “Olaf’s Frozen Adventure.” Personally, I have nothing against either and I’m not ashamed to admit I enjoyed both. But I don’t begrudge those who can’t stand Anna, Elsa, and the rest of the Arendelle gang. Their presence was over-saturated in popular culture– and especially in the Disney theme parks– for a long while (though that has died down over the past couple of years) so I can appreciate being annoyed by their very presence if you’re already fed up with the whole thing. 3 – The two movies have different demographics

Historically, Pixar shorts attached to Pixar movies have worked wonderfully because they’ve introduced complimentary themes or ideas to receptive audiences. In pairing “Olaf’s Frozen Adventure” with “Coco,” Disney appears to have wanted to broaden that audience– to attract moviegoers who may not be inherently drawn a story about Dia de los Muertos or Mexican culture at large.

That plan has backfired in the way that playing a horror movie short in front of a light-hearted comedy might. Like it or not, Pixar audiences tend to skew a bit older and more mature than with that of Disney Animation Studios. “Frozen” may be fun for the whole family, but its apparent target fanbase still comes across as very young. And “Coco” attendees who have actually come for the specific cultural authenticity are understandably finding Disney’s attempt at undistinctive mass appeal with “Olaf’s Frozen Adventure” to be just a little insulting. Ultimately I feel like this comes down to a case of bad programming. I don’t think the “Olaf’s Frozen Adventure” haters are wrong per se, but I do think the featurette may be playing for the wrong audiences. In my opinion, the short isn’t bad in the right context. I wish Disney had trusted its initial instincts and aired it as a special on ABC this holiday season. I think there it would have been as warmly received as it was at the press screening I attended.

Pixar has trained audiences to expect memorable Pixar shorts (that are actually short) with their Pixar movies, and I believe the lesson learned this weekend is that audiences wouldn’t have it any other way.