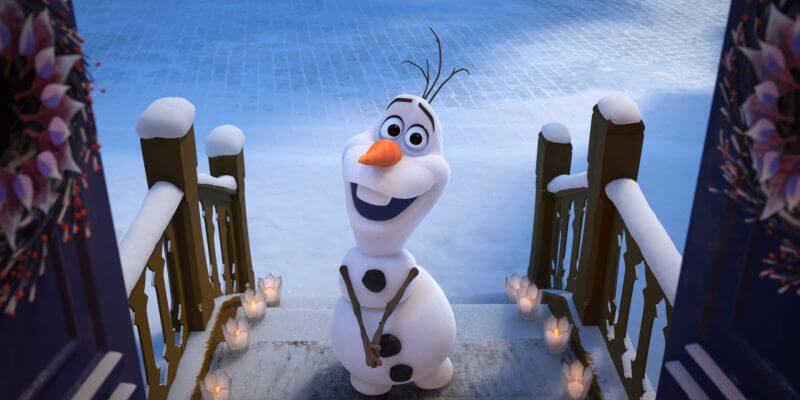 It’s been four years since Disney’s juggernaut princess tale “Frozen” charmed its way into the hearts of moviegoers around the world, introduced the unstoppable earworm of an original song “Let It Go,” and eventually went on to become the highest-grossing animated film of all time. Since then we’ve seen the lively animated short “Frozen Fever” but we’ve still got a little while to go before delivery of the official feature-length sequel “Frozen 2.”

In the meantime, Disney has assembled the cheerful “Olaf’s Frozen Adventure,” originally developed as a holiday special for television but repurposed as a featurette and attached to Pixar’s new movie “Coco” for release this Thanksgiving. I had the opportunity to see “Olaf’s Frozen Adventure” recently and was delighted by its energetic animation, catchy original tunes, and heartwarming story.

After my screening at the Walt Disney Studios Animation building in Burbank, producer Roy Conli (“Big Hero 6”) took the stage with directors Kevin Deters and Stevie Wermers (“Prep & Landing”) and voice star Josh Gad (“Beauty and the Beast”) to discuss how Olaf‘s headlining holiday short came to be.

Josh Gad:  It’s a thrill to come back. It’s a thrill to work with such a brilliant new team who’s taking this character and opening new doors for him to go [through]. The first movie is so much about Olaf discovering. He’s almost like a newborn waking up. So, as we continue to tell these stories, what’s fun as an artist is to get to have Olaf be in a place where now he’s learning and growing, emotionally and [in] his education. The things that he’s seeing, he’s processing, and I love that. I love that growth.

Kevin Deters:  As far as the actual idea behind the storyline, Stevie and I sat in the Story Room and I think our first challenge was looking at Olaf as a character. He was designed as a supporting character in the feature, and he’s guileless, he loves everybody, he’s very happy. As storytellers we thought, ‘Oh gosh, what are we going to do to create a nice dramatic story centered around a character like that?’

We realized that he’s a bit of a little child, and that was kind of our doorway into it. And then we started talking about different relatable thematic ideas that could resonate. Stevie Wermers:  The fact that it’s a holiday special kind of put us [in] this box to work in. When you think about the holidays, what are some of the things you think about? Tradition was one of the things that we came up with. That seemed to segue so nicely into the fact that Olaf is brand new, and he wouldn’t have traditions. And also, [Anna and Elsa] wouldn’t really have any either, because of what happened in the first movie. So it seemed to fit really well right out of the gate.

Deters:  We had several ideas in the Story Room– different storylines, different wacky, strange ideas. To his credit, John Lasseter definitely always zeroes in on the emotional core of an idea. And he recognized immediately the idea of traditions of the holiday seasons being something that was really relatable to everyone, and that was it. Wermers:  This featurette is about traditions. Basically, no matter where you’re from, no matter what your religion is, we all celebrate some kind of tradition around the end of December, the holiday season. This is something that Olaf discovers on his own. He realizes that he doesn’t have any traditions. This is what led us to this story.

Deters:  We thought it would be a good marriage of a character that’s new to the world– he’s kind of child-like, in a lot of ways, a kid at Christmastime– and the idea of traditions. We thought that was a fun idea. We’ve been working on it since about January of 2015. In animation that’s actually light speed. It’s a twenty-two minute piece with four new songs from Kate [Anderson] and Elyssa [Samsel].

Josh Gad:  I remember that Kristen, Adina, Jonathan, and I all got together shortly after the first time we heard the songs, and all of us could not believe how good the songs were. We were all like, ‘Have you heard what they did? These are really good songs.’ And it’s hard because you have such iconic music from the original film. Especially [new song] ‘When We’re Together,’ I can’t shake that song. Good luck parents, because it’s going to play a lot in your household. It’s incredible music.

Bobby Lopez, who wrote ‘Book of Mormon,’ which I did with him, he would always write [the vocals] like an octave higher than I deserved to sing it, and carried that tradition over to ‘Frozen.’ So when the brilliant songwriters Kate and Elyssa came in and did this, I was like, ‘Oh great, they’ve been speaking to Bobby and Kristen [Anderson-Lopez],’ and it is hard.

Especially that song [‘That Time of Year’], [singing] ‘It’s my favorite time…’ Pappa doesn’t want to sing that [high]. [laughs] If it were up to me I’d be like [much lower register] ‘It’s my favorite time of year,’ but that’s not Olaf.” It’s tricky to get back into that mode, and keep the voice bright and Olaf-y when he’s singing songs like ‘In Summer’ or this brilliant song in this film. Gad:  [‘That Time of Year’] is a tongue-twister, and we had to sing it live at D23 [Expo]. Before I got there, they’re like ‘We’re gonna have a monitor right in front of you, and you’ll be able to lip-synch to Olaf’s animation.’ And I get there and I’m like ‘That’s great, because I’ve never sung this live,’ and they’re like ‘By the way, that monitor that we told you about? That doesn’t exist.’

‘You’re just gonna have to do it. You’re gonna have to wing it.’ And I’m like ‘Wait, what?’ So we did it, and my heart was beating through my chest. But it was surreal, we actually landed it. Once in a lifetime– I promise you, nine out of ten times that would have been a disaster.