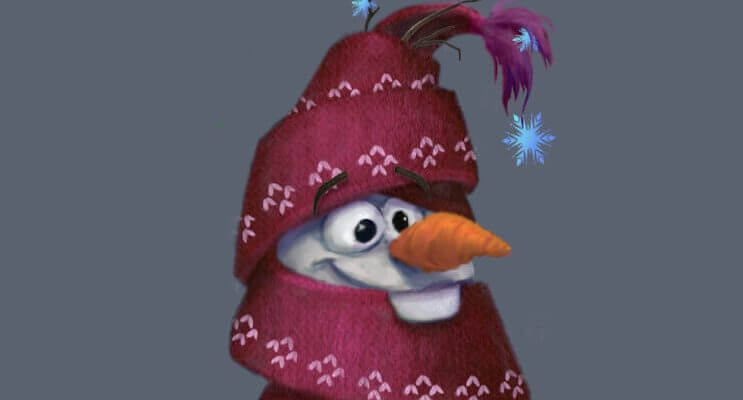 The holiday-themed short needed to look celebratory, with a brighter color palette than “Frozen.” To do this, Disney animators focused on a “picture-postcard holiday” vibe for Arendelle. “We were asked to make every single house happier,” said Hans-Jörg Keim, head of environments for “Olaf’s Frozen Adventure.” “We added traditional holiday décor throughout the village—inside and out.”

Below, take a look at the finished product from the featurette. Olaf’s massive sleigh, which included 109 design elements, was inspired by this piece of concept art: Elsa and Anna’s gowns were designed by Mike Giaimo and character design lead Griselda Sastrawinata-Lemay. They’re pictured below along with Kristoff: The complementary color palette of the gowns unites the two characters as sisters. “Elsa’s gown is dusty gray-blue with a jeweled bodice that also features a special emblem—three arms of her signature snowflake that reflect the Frozen blue-violet color palette,” said Giaimo. After creating the stunning visual development art, it was time to translate it into fully-realized CG characters. According to Claudia Chung Sanii, head of characters & technical animation, a lot of work went into rendering the sparkly gems and emblem on Elsa’s dress in order to make them clear and realistic.

For Anna’s dress, pictured below, the team included lots of elaborate embroideries and added elements of Kristoff’s look to unify the two characters. “Anna’s sash is actually a pattern of Kristoff’s semi-sash,” said Griselda Sastrawinata-Lemay. Olaf also wears a few bowties, one of which is fashioned from a holiday wreath. Later, Elsa creates a bowtie for Olaf to mirror the design of her signature snowflake. Finally, take a look at the concept art for the incredible ice tree Elsa creates at the end of the film: If you missed “Olaf’s Frozen Adventure,” you can now purchase it along with six classic Disney holiday shorts here.