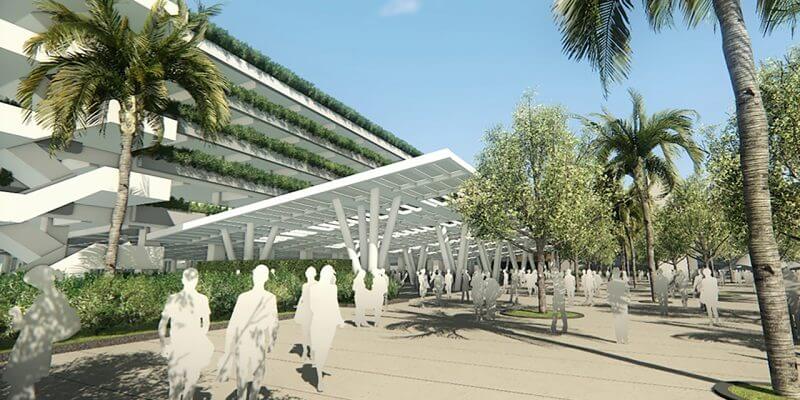 It’s been a huge day for announcements from Anaheim, California’s Disneyland Resort, home of Walt Disney’s original Magic Kingdom and much, much more. First we heard official confirmation (and saw gorgeous new concept art) of the new 700-room, Four-Diamond hotel coming to the popular tourist destination. Then we found out which Downtown Disney District businesses will have to be removed to make way for this “resort oasis.”

On top of all that, we now have news of expansions and improvements coming to Disneyland Resort’s parking infrastructure, by way of two entirely new garages. The first new structure will house 6,500 spaces and will be located on what is now the Pinocchio parking lot, directly adjacent to the existing 10,000-space Mickey & Friends garage. Construction will begin in February of 2018, with an opening expected the following year.

The second structure (visible in today’s newly-released concept art) will be erected west of the Paradise Pier Hotel and will service the soon-to-be four Disneyland Resort Hotels. No official word has been released on when this garage will open to guests, but it will certainly see operation by 2021, when the new hotel is scheduled for completion. An interesting side note gleaned from the fallout of these announcements is that Disneyland has apparently abandoned its long-planned Eastern Gateway project on Harbor Boulevard to the opposite side of the Resort’s two theme parks. Southern California newspaper The Orange County Register spoke with Disneyland officials, who confirmed that the venture will not proceed.

The plan, had it come to fruition, would have included “a seven-story, 6,900 spot parking structure, a new transportation hub with security screening and a pedestrian bridge,” but Disney ran into roadblocks when local businesses and the Anaheim City Council raised concerns. The developments announced today are on the western side of Disney property and are not affected by the same restrictions.

Despite the setbacks and changes in plans, Disney remains confident that the new parking enhancements will “dramatically improve parking and traffic flow throughout the resort.” With everything else coming to Disneyland over the next few years, it’s certainly going to need it.