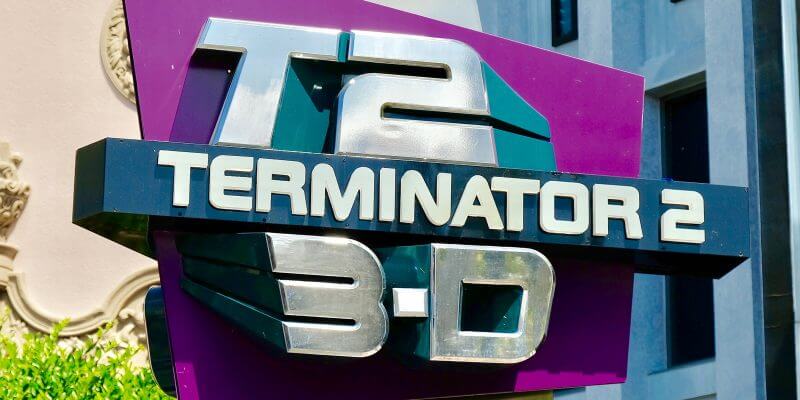 Last night fans got to experience the attraction one last time as Cyberdyne Systems opened their doors for a final showing.

The last show was filled with cheers, laughter and a few tears from the show’s performers and some audience members as it was the attraction’s last show after 21 years of operation. To celebrate the last show, both casts of stage actors who would regularly perform came out for one last bow. Some guests even got to score some selfies with the Sarah Connor and T-1000 performers.

WATCH – EXTENDED FINALE OF CAST AT LAST SHOW EVER: The inspiration for the attraction began in the early 1990s, as it was originally developed for Universal Studios Florida, with the possibility of the attraction making its way to Universal Studios Hollywood. This popular action packed adventure cost a total of $60 million, with a total run time of only 12 minutes. The film by itself cost $24 million, which makes it one of the most expensive films per minute in the world, next to the late Michael Jackson attraction film Captain EO at Epcot, which cost almost the same at $23.7 million.

The attraction was a mini-sequel to Terminator 2: Judgment Day and was created by director James Cameron and the entire main cast from the movie, which included Arnold Schwarzenegger as The Terminator, Linda Hamilton as Sarah Connor, Edward Furlong as John Connor, and Robert Patrick as the T-1000.

The story of Terminator 2: 3-D was broken up into two separate parts, a pre-show where a Cyberdyne Systems company host would show guests a brief video presentation about the company’s innovations, and the main show, where live performers would appear on stage and run through the audience with explosions and other interactive set pieces.

In the queue, guests would see dozens of television monitors that would show a series of video segments, which were all of course presented by “Cyberdyne Information Network.” The videos would discuss the latest innovations and products of Cyberdyne systems and would include several special musical segments. The video contained two songs from the film, “Bad to the Bone” and “Guitars, Cadillacs” and a live video feed from Costa Rica of a performance of the song “La Bamba.”

In between the videos were live images of the waiting audience and two brief comical sketches of “customers” getting in trouble by the Cyberdyne security team. These bad behaved guests would be electrocuted by a security device or arrested. This was also where you would get your 3D glasses for the main show. After the queue, guests would enter the pre-show room. Here is where visitors would stand and experience a presentation hosted by Kimberly Duncan, which would promote Cyberdyne Systems and introduce the coming SKYNET. But, during this presentation, Sarah and John Connor would interrupt the video feed and discuss the true intentions of Cyberdyne Systems and SKYNET. Both would warn of the coming war and catastrophic events that would follow the launch of the new computer system. The footage in the video was updated in 2015 to include more relevant video to the times as the attraction was first opened in 1991. In fact, the footage in the original video included technologies that were already in existence.

Shaquille O’Neal had a small cameo in the original pre-show video. During his cameo viewers would be asked to think about a basketball game in which players are equipped with special contact lenses – called ”vision-enhancers” – that would ”make human error a thing of the past.” This was when Shaquille O’Neal would appear on-screen, outfitted with the lenses, which gave him Terminatorlike vision and would allow him to make a perfect shot. Once the pre-show finished, guests would be escorted into a large 700 seat theater where they would experience a demonstration of Cyberdyne’s newest creation, robotic soldiers named T-70 Terminators. After guests chose their seats, they were told to put on “safety visors” to watch a demonstration of the Terminators in action. But to the dismay of Cyberdyne, Sarah and John Connor would arrive and stop the presentation. Then a T-1000 Terminator would come out and they would have a shootout. The host, Kimberly Duncan would be killed by the T-1000 while attempting to stop it. Next, a second Terminator (Arnold Schwarzenegger) would burst through the movie screen (portal) on his Harley-Davidson motorcycle. He would pick up John and take him back through the portal (movie screen) and into the future war that had occurred from the launch of SKYNET. The war between humans and machines. John and the Terminator would defeat the T-1000 and then make their way across through the war torn lands as they headed to Skynet. During their trip, four flying robots would chase after them, which as a team they would destroy. Then Terminator and John would descent with the audience into Skynet’s core, with the intent of blowing it up. Of course, they couldn’t just walk in and blow the place up, a T-1000000 disguised as a giant liquid-metal spider would attack them. To save John, the Terminator would send him to the present while the machine stayed behind to blow up Skynet and the T-1000000.

At this point in the show water would squirt from the ceiling onto guests and the show would end with the destruction of Skynet. The theater would fill up with smoke, which would engulf the audience and the seats would make a drop motion to give guests one last piece of action before the end. The actors portraying Sarah and John would then come on stage and hug and Sarah would finish the show by saying she feels that she owes her life to the Terminator. After Sarah finished speaking, a terminator endoskeleton’s face would appear on the screen, which would morph into Schwarzenegger’s face before fading to black. Word is still not known of what attraction will take Terminator 2: 3-D’s place at Universal Studios Orlando. Although, Universal has made a statement about the closing of the attraction and what is to come in the future.

Terminator 2: 3-D at Universal Studios Florida will run its last shows on Sunday, October 8 to make way for an all-new live action experience based on a high-energy Universal franchise. It will open in 2019. This is one of many exciting new experiences coming to Universal Orlando Resort as we continue our epic growth.