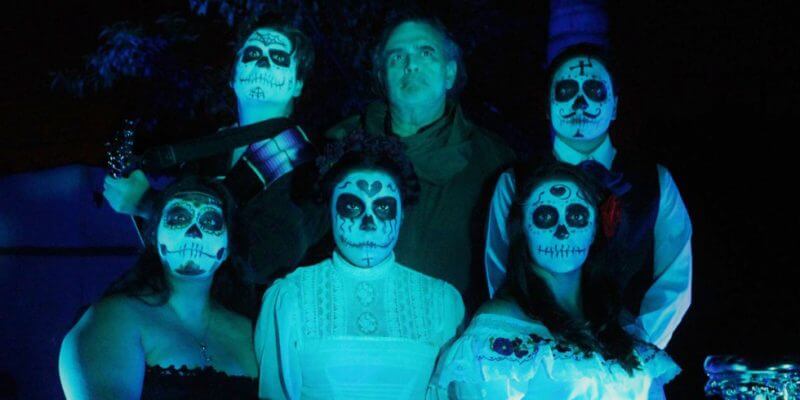 Halloween gets a lot of traction in events around Southern California during this time of year, but what of the Mexican holiday Dia de los Muertos (AKA Day of the Dead)? There’s a vibrant seasonal area dedicated to the celebration at Disneyland Resort right now, and on November 1st folks will line up at festivals and cemeteries to observe the traditions associated with the occasion. But how is Dia de los Muertos represented in the booming Los Angeles immersive theater scene?

This past weekend I was invited to a play called “Fallen Saints: Dia de los Muertos,” co-directed by Sebastian Muñoz, one of the minds behind this year’s fantastic “Wicked Lit” experience, so I had to go check it out. Watch the video review below for my off-the-cuff thoughts, and then read on…


As noted in the above video review, “Fallen Saints: Dia de los Muertos” brought to mind a scaled-down version of Thornton Wilder’s 1938 American classic “Our Town”– deceased characters populate the performance area and retell the events surround their lives and the circumstances of their deaths. But “Fallen Saints” turns up the dial on interpersonal tragedy, and delivers something quite unique in the process.

Upon entering the theater, the audience is divided into four families and– after passing through a lobby convincingly decorated as a cemetery– assigned to one of the dead being honored in the black-box, minimally-adorned space where the bulk of the action takes place. Gifts are bestowed by guests to the fallen, and the tale begins. This is a tale of love and betrayal in a small Mexican town, and without giving too much away I can say that the five spirits that make up the central cast are all interrelated, as was their individual demises. Most of the play’s narrative is told via flashbacks, filling in the gaps in memory left when one of the key figures passed away.

Along the way there is romance in this account, and lively music– complete with clapping and singing along– but don’t let that fool you. “Fallen Saints” is a sad story indeed. Guests may depart the proceedings reflecting on their own lives and how their decisions affect others in their families and communities. The performances in “Fallen Saints: Dia de los Muertos” are all excellent, and I want to give special attention to the evocative (though deceptively simple) lighting design. Primary colors illuminate the actors and help convey emotions via changes in mood. The innovative staging of the play further draws the audience in and allows viewers to lose themselves in the lives (not to mention deaths) of these characters.

Though I was introduced to this event through the L.A. immersive theater scene, “Fallen Saints” isn’t overwhelmingly interactive. There are moments scattered throughout where the crowd is encouraged to participate, and a few points where a guest is physically brought into the performance space, but otherwise this is a standard 45-minutes dramatic show– albeit delivered in the round rather than on a stage. Overall, this event is ideal for anyone seeking out serious-minded and season-appropriate content that’s a little off-the-beaten-path in L.A. It’s also a welcome reprieve from the same-old Halloween spooks and scares that saturate the city during this time of year.

“Fallen Saints: Dia de los Muertos” runs on Fridays and Saturday through the remainder of October at the Generation DCD Studio in Burbank, California. For more information and advance ticket sales resources, be sure to visit the official website of Force of Nature Productions.