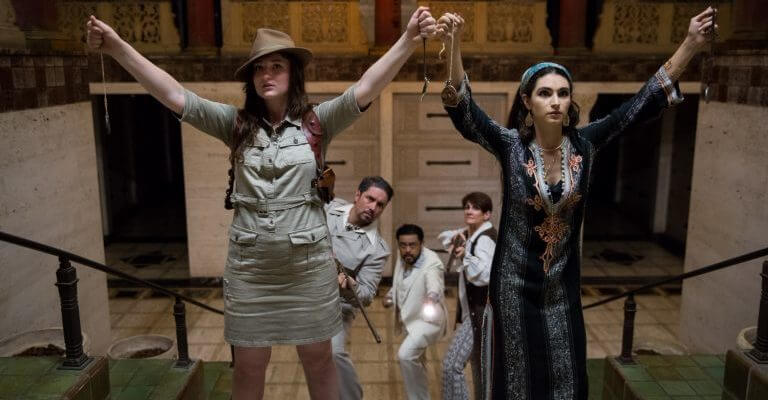 Halloween season is upon us, and that means the busiest time of year for immersive theater in Southern California. One of the top-tier examples in this category– “Wicked Lit”— has returned to the Mountain View Mausoleum in Altadena, and I had the chance to experience the show this past weekend.

Much like last year, I was thoroughly impressed with what the Unbound Productions theater company put together.  Watch the video review below and then read on for my further thoughts on “Wicked Lit.”


If you haven’t already been exposed to it, approaching the ever-growing immersive theater scene can be a daunting task. I remember dragging my girlfriend to our first performance of “Delusion” back in 2014 after hearing my now-boss Ricky Brigante rave about it on the Outside the Magic podcast. We weren’t 100% sure of what to expect, but we definitely walked away wanting more.

Ultimately I feel like you have to enter into immersive theater as kind of a leap of faith. If you enjoy engaging storytelling, themed entertainment, and in general creative people doing creative things, chances are you will find yourself brought into the fold after getting just a taste. Fortunately, Halloween season in Los Angeles is the perfect time of year to first step foot into this amazing world. “Wicked Lit” sits near the very top of my list of immersive theater events I’ve experienced, mostly because it’s abundantly clear how much work, love, and care goes into the production. The show makes consistently excellent use of its mausoleum home– frequently venturing into the surrounding grounds and neighboring cemetery– while simultaneously combining first-rate acting with effectively moody lighting and chilling effects, all of which add up to an undeniably unforgettable whole.

Audience members begin their visit by entering into a lobby area on the lawn outside the mausoluem– this time called “The Calm” in a place known as Liliom (essentially purgatory)– and are immediately told that they have recently passed away. What follows is a series of three half-hour horror stories (“Moments of Misery” experienced by lost-soul “Unfortunates,” in Liliom-speak) performed by the talented cast in real time across very real spaces: only the interstitial framing-device monologues in Liliom are delivered from a stage. Ultimately it’s that “real” feeling that makes “Wicked Lit” so very worthwhile. The pace and energy level of each tale are increased when onlookers follow the characters from scene to scene, the tension palpable as you enter into spaces you would have to watch from afar in a more ordinary theatrical setting. The action happens around you while you serve as witnesses to the damned.

“The Damned Thing,” by the way, is the title of the short play that I enjoyed the most in this year’s “Wicked Lit” lineup. Based on a 1893 tale by Ambrose Bierce, it contains the most kinetic movement, the funniest comic relief, and the best actors of the bunch. But all three plays are compelling and well-executed, and the entire undertaking is something you should absolutely make a point to check out.