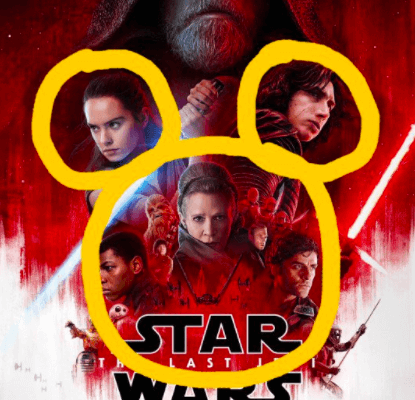 In case you missed it, an exciting new trailer for Star Wars: The Last Jedi arrived on Monday along with a new poster. Tickets are officially on sale, too.

Amid the media extravaganza, “Last Jedi” writer/director Rian Johnson and the folks at MouseInfo are having a little fun. In Vanity Fair‘s new article about the movie, it seems there some ambiguity about who “The Last Jedi” is referring to, but Johnson cleared that up immediately on Twitter.

And in the long Disney fan tradition of looking for Hidden Mickeys, MouseInfo tweeted this very obvious nod to the mouse on the new Star Wars poster. Once you see it, you can’t unsee it.

ONCE YOU SEE IT, YOU CANT UNSEE ITTTTTT #TheLastJedi pic.twitter.com/m3FyCC71ZN

December 15 feels far, far away, but at least the internet will keep us entertained until then.