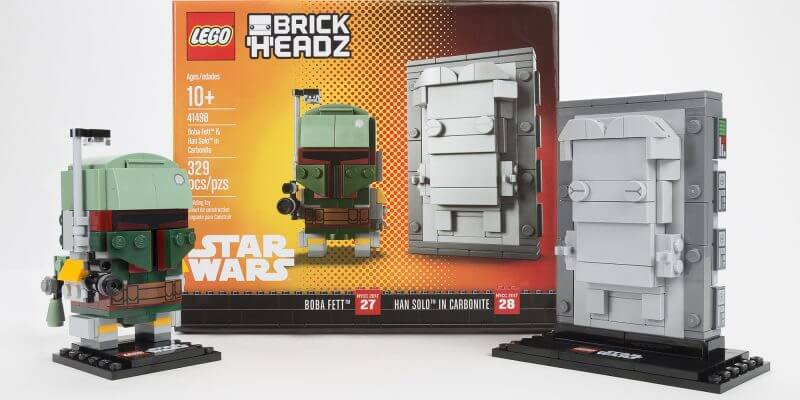 The LEGO BrickHeadz series of buildable figures has been going strong since it was first introduced early this year, with sets from franchises including “Beauty and the Beast,” “Pirates of the Caribbean,” Marvel/DC superheroes, and Ninjago.

This morning LEGO has announced the very first Star Wars-themed BrickHeadz– which will be sold in a set of two as an exclusive to New York Comic-Con– infamous bounty hunter Boba Fett and Han Solo frozen in Carbonite, both of which made their live-action debuts on-screen in “The Empire Strikes Back.” The LEGO BrickHeadz Boba Fett & Han Solo in Carbonite will be set number 41498, contains 329 total pieces, and will retail for $40 at the convention. The Han Solo figure is also the first BrickHeadz to feature the new official “closed-eye” design, and has the largest base made so far in the series. Best of all, every uniquely-decorated part included here is exclusive to this model. This great-looking two-character set will only be available at LEGO’s mobile experience during New York Comic-Con 2017, which takes place this Thursday through Sunday, October 5-8, at the city’s Jacob K. Javits Convention Center in Midtown Manhattan. Be sure to visit the event’s official website for more information.