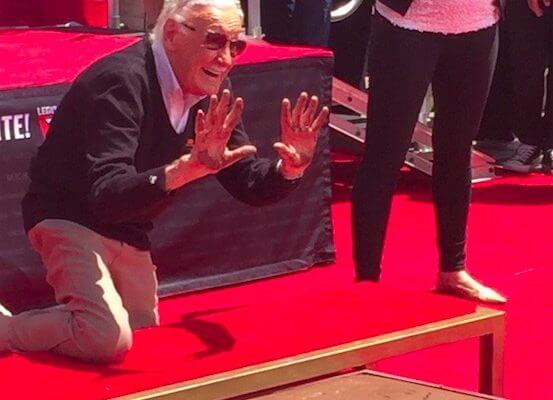 Excelsior! The great Stan Lee was honored at the TCL Chinese Theatre today as he plunged his hands and feet into the cement, as so many celebrities have done before him.

The legendary comic creator is responsible for many of Marvel’s most iconic characters including Spider-Man, The Incredible Hulk and the X-Men. He helped to create a comic book universe that has since made the jump to both the big and small screens.

Lee was joined at this ceremony by Todd McFarlane, Kevin Feige, Kevin Smith, Chadwick Boseman and Clark Gregg, who have each benefitted from and continued his work. Today, Lee is most likely known for his brief appearances in Marvel movies like “Marvel’s The Avengers,” “Guardians of the Galaxy,” and most recently “Spider-Man: Homecoming.”

He has created a legacy that consists of much more than just cameos however, as Lee is recognized all over as probably the most famous comic writer of all-time. Congratulations Stan Lee. We are all true believers!