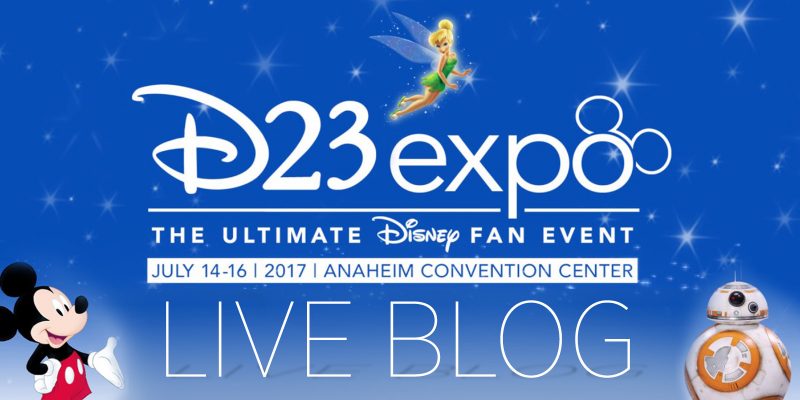 The biggest event for Disney fans is finally here! The D23 Expo 2017 officially kicks off tomorrow for three solid days packed with excitement, announcements, and surprises.

This is the event that in the past has given us first looks at New Fantasyland, Star Wars Land, Star Tours 2.0, Pandora – The World of Avatar, and Shanghai Disneyland – to name a few. We got to see Johnny Depp live as Captain Jack Sparrow… twice! We saw countless legendary figures become official Disney Legends, shedding many years along the way. We got access to talk with the Imagineers, filmmakers, and other creative minds behind it all.

And now it’s happening all over again – with signs pointing to this year’s event being the biggest in its history!

Get all the latest D23 Expo 2017 updates here and in the live blog below.

Be sure to follow us now through the end of Sunday on Twitter, Facebook, and YouTube as well as in the live blog below, which will feature all the latest information, links, photos, videos, and details!

(No need to refresh. The live blog below will auto-magically update whenever we add something new.)

Could we see Shanghai’s “Tron” roller coaster announced for the Magic Kingdom? Perhaps the “Ratatouille” ride is coming from Paris to Epcot along with a “Guardians of the Galaxy” ride? Might “Wreck-It Ralph” (finally) take over for Stitch’s Great Escape? Is Marvel Land coming to Disney California Adventure? And – could we truly be getting a “Star Wars” hotel at Walt Disney World? Any or all of these rumors could come true – or they all could be replaced by something even more unexpected.

We begin our coverage tonight at 6pm PT / 9pm ET with a preview of the Walt Disney Parks & Resorts pavilion, called “A Galaxy of Stories,” with an early look at what awaits us in Star Wars Land. For the next three days, our lead SoCal reporter Mike Celestino will be covering the D23 Expo on the scene, assisted by videographer Robert Garren.

Our team will be at every major panel and all over the show floor, bringing you everything exciting from the D23 Expo 2017. So stick with Inside the Magic for the next few days!

See the full D23 Expo 2017 schedule here to follow along.