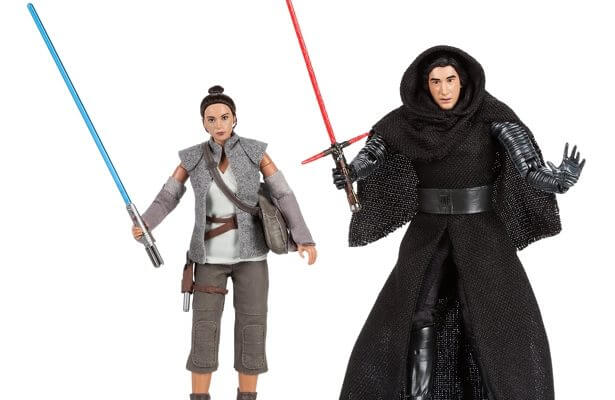 We’re just a couple days away from the start of Disney’s official fan event D23 Expo 2017 in Anaheim, California. That means we’re seeing a lot more announcements about what kind of merchandise fans will be able to get their hands on during the convention.

Today in an exclusive story over at Nerdist, Disney revealed six new Elite Series “Star Wars” action figures in the 12-inch scale. The detailed figures come in three sets of two-packs: Darth Vader with his daughter Princess Leia (in her Hoth gear from “The Empire Strikes Back”), Jyn Erso and the villainous Orson Krennic (from “Rogue One: A Star Wars Story”), and Rey partnered with a helmet-less Kylo Ren (from “Star Wars: The Force Awakens” and the upcoming “Star Wars: The Last Jedi”). Each set of two figures will cost $79.95 at the convention, include a numbered certificate of authenticity, and is limited to 1,000 copies. No word on whether these toys (or non-exclusive variations thereof) will be available for purchase after D23 Expo, but your best bet is to try to nab them during the event if you want to take them home. D23 Expo 2017 runs from this Friday to Sunday, July 14th through the 16th at the Anaheim Convention center, just across the street from the Disneyland Resort in Southern California. Be sure to visit the official D23 Expo website for more information and ticketing resources.