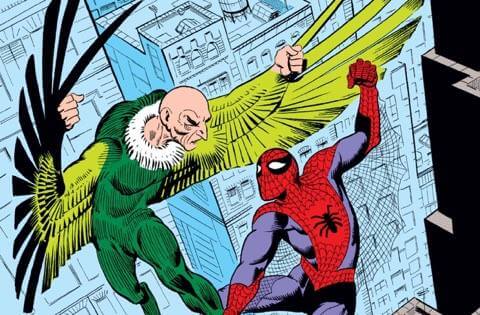 The much anticipated “Spider-Man: Homecoming” is just about here. Finally, the story of Peter Parker gets to be told within the Marvel Cinematic Universe. Spider-Man is home.

But Marvel has been telling the story of Spidey for a long time. The web-slinger made his comic book debut way back in 1962 and has been a staple ever since. So with all of that history to draw from, it’s obvious that we can expect to see parts of this movie that jumped right off of the pages of Spider-Man comic books.

And with so many classic Spidey characters crammed into this movie, there are plenty of comics to draw from. There will be a lot of familiar faces from Spider-Man’s rogues gallery popping up in the MCU, so we may see some familiar scenes as well. The primary antagonist of the first film is going to be one of Spider-Man’s oldest. The Vulture made his debut way back in just the second issue of the long-running “Amazing Spider-Man” series. The deadly foe will be portrayed by Michael Keaton.

Despite the lethality of this villain, Spider-Man never takes a break from his witty banter. In the panel above, the wall-crawler refers to him as “Feathers” and “Baldy.” We have already seen some of this banter from Tom Hollands’ Spider-Man in “Captain America: Civil War” and I would bet we can expect to see more in the future.

2. Turmoil at the Terminal A staple of superhero movies has been the destruction of familiar places, especially in New York. In this panel, Spidey and the Vulture battle in Grand Central Station. Of course, it did not end well for the famous terminal. I’d be willing to bet something like this happens in a Spidey movie somewhere down the line.

Super strength, endurance, agility and spider sense are among some of Spider-Man’s most famous powers. But often overlooked is his incredible scientific mind. Peter Parker developed his own web shooters and even the webbing itself. Tony Stark, being the narcissist that he is only briefly gives Parker praise for these inventions in “Captain America: Civil War.”

If Spidey is going to bring down the Vulture, he will likely do so with science, as seen in the panel above. Parker developed a device that would shut down his feathered foe’s technology, leaving him helpless in mid-air. I would expect to see a similar ending to this conflict and others in future films.

The Vulture won’t be the only threat to leap off of the pages and onto the big screen though. Here are some panels we might see based around other characters: Phineas Mason A.K.A. the Tinkerer will also show up in “Spider-Man: Homecoming.” Have you ever wondered where all these super villains get their awesome technology from? Well, in the comics, most of them get it from the Tinkerer.

The evil scientist develops weapons for crooks and occasionally keeps some for himself. As Spidey’s bubble says in the panel above, he may look harmless, but Mason is one of the most dangerous villains in the Marvel universe. I’d imagine he will play a bigger role in future Spider-Man films and the MCU as a whole.