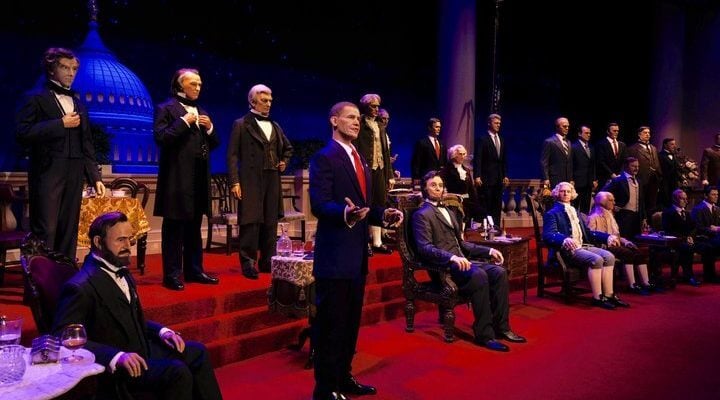 UPDATE #2 (6/27/17): The Vice article has been updated with clarifications from Disney:

Correction: The original version of this story was imprecise in describing tension at Disney around the Trump installation in the Hall of Presidents. Our source spoke directly with multiple employees at Disney World who described tension regarding the installation, but did not have direct confirmation from anyone at Disney’s corporate level as originally reported. After this story was published, Disney denied any tension at the Hall of Presidents.

UPDATE #3 (6/28/17): Vice has retracted both of their original stories on so-called “drama” behind the Hall of Presidents. In their place, a note and apology from their editor remain:

After a thorough investigation into the sourcing of two stories, “Here’s the Secret Backstage Trump Drama at Walt Disney World’s Hall of Presidents” and “Behind the Scenes of Disney’s Donald Trump ‘Hall of Presidents’ Installation”, and the identification of several factual errors, we have decided to retract both pieces. We are conducting a full editorial review to pinpoint how this source was vetted, and how these stories were approved and published in violation of our usual editorial workflow. We fell short of our standards, and regret the error.

Our original article remains intact as a summary of Vice’s article.

Disney recently announced that the Donald Trump animatronic figure coming to the Magic Kingdom’s Hall of Presidents will speak when the attraction reopens at Walt Disney World. That has been the case for every president since Bill Clinton, so the news wasn’t completely shocking.

However, Trump’s speech for the attraction has not yet been recorded. According to a source for Vice, Trump’s communications team is combating Disney Imagineers when it comes to the specifics of the speech. The source went on to explain that a possible solution has been reached and it is possible that the attraction may revert back to its original format in which Lincoln was the only speaking president.

The Walt Disney World attraction is currently set to reopen this fall.