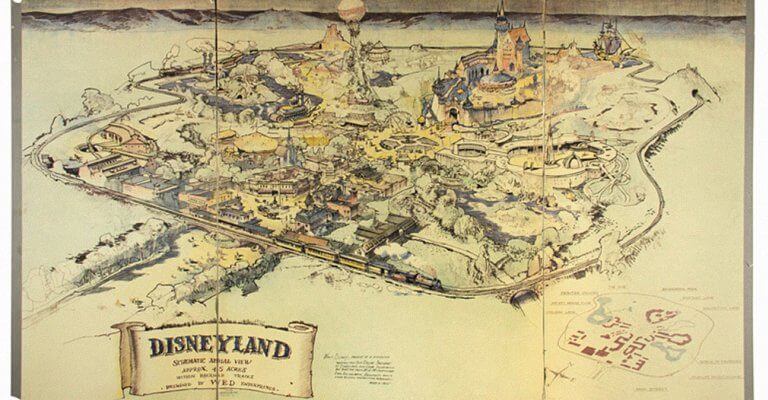 The original, hand-drawn Disneyland concept art created by Walt Disney and the legendary artist Herb Ryman was the most talked about item on the auction list. Several similar maps have been auctioned in the past, but this version was in collector Ron Clark’s possession for 40 years before he decided to sell the piece.

The final price at Van Eaton Galleries was $708,000, setting a record for Disney map sales and making it one of the most expensive Disneyland items ever sold on the open market. A rare, hand-silkscreened poster created to promote the grand opening of the Haunted Mansion attraction was also auctioned for ,500.

Disney partnered with Carnation Ice Cream to offer “I Scream” sundaes during the grand opening festivities. Haunted Mansion-themed orange plastic spoons were included with the sundaes, which were available at the Carnation Ice Cream Parlor in Disneyland. Other highlights from the Haunted Mansion collection include the Tomb Sweet Tomb prop, which sold for $26,550. Dueling Ghost maquettes used in the creation of the Haunted Mansion sold for $15,340. The original bell from Engine #3 on Mine Train Through Nature’s Wonderland (which closed to make way for Big Thunder Mountain Railroad) auctioned for $16,520. Nearly 1,000 Disneyland collectibles from 1953 through the present day were auctioned on Sunday, including Walt Disney’s “Cinderella” script with his handwritten notes.

For more information on upcoming auctions, head over to the Van Eaton Galleries website.

Comments Off on Original 1953 Disneyland map fetches $708,000 among other Disney items at Van Eaton auction