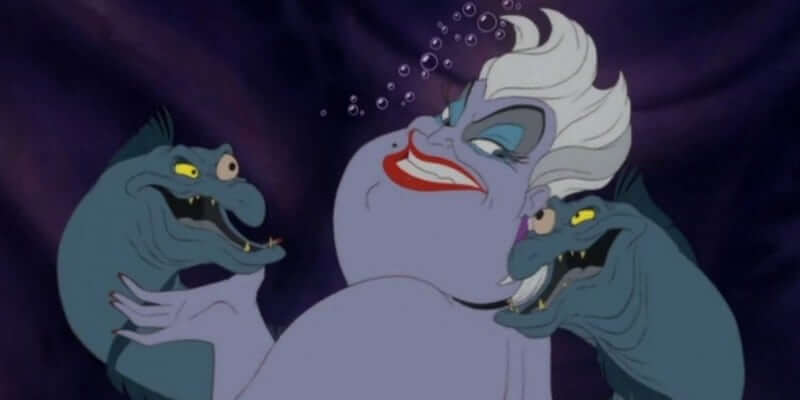 In the Hans Christian Anderson version of this classic fairy tale, Ursula had a much smaller role.  Walt Disney Animation gave the Sea Witch a much bigger part of the story in crafting their primary villain for their 1989 animated feature “The Little Mermaid.” Ursula is one of the most popular Disney Villains. Her appearance is based in part on pop star Divine and Hollywood legend Norma Desmond. This Cacaelia (a half human half octopus) sea witch was the main antagonist in Disney’s 28th animated feature, “the Little Mermaid.”

Having never gotten over being banished from Atlantica, Ursula wanted the undersea throne for herself.  With the help of her electric eel sidekicks, Flotsam and Jetsam, was willing to do whatever she could to take the throne from King Triton. She decides to trick Triton’s daughter, Ariel by giving her legs in exchange for the princess’ voice so Ariel can woo her crush, Eric.

Next, the witch herself transforms to human form to steal Eric away.  The plan is thwarted by Ariel’s friends.  This prompts Ursula to take Ariel captive and force King Triton to trade his throne and power for his daughter’s freedom.  Ariel attacks Ursula, but that only manages to enrage the witch.  With Triton’s trident, Ursula goes on a rampage, growing to monstrous size and attacking Eric and Ariel.  Ultimately, after escaping her captivity, Eric manages to impale the giant cacaelia with the bow of one his ships.  The evil sea witch’s demise releases all from her power. Ursula herself does not appear in The Little Mermaid II: Return to Sea, but her voice does.  Morgana, Ursula’s sister, is voiced by Pat Carroll – the same actress who voiced the malevolent sea witch in the first film.  She is also seen several times in the cartoon series “House of Mouse” (and its spin off “House of Villains”).

The sea witch also made several appearances in ABC’s “Once Upon a Time” series.  First a warning to the Evil Queen, who had posed as Ursula, then as the Sea Witch herself later in the series.   In one flashback episode, a young Ursula is seen with her father King Poseidon (Ernie Hudson).

Kingdom Hearts, in its various versions, has featured Ursula as a villain several times.  Her video game villainy also appears in “Epic Mickey: The Power of Illusion” and “Disney Princess: My Fariytale Adventure.”

In the Broadway adaptation of “the Little Mermiad,” Ursula is sister to King Triton (as was initially intended in the first animated feature). Ursula makes a villainous appearance in various shows at Disney parks around the world.  She’s featured in “Fantasmic,” “World of Color,” “Hallowishes,” “Mickey and his Magic Halloween Night,” “Disney Dreams!” “Villains Night Out,” and on the “Disney Dream” in “Villains Tonight” Ursula, in the 1989 Disney animated feature was voiced by the amazing and talented Pat Carroll.  Here she is at a convention appearance (Spooky Empire):