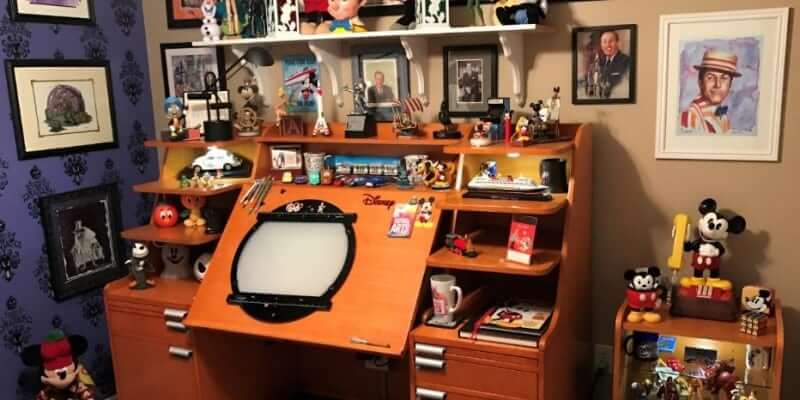 Jamey Wright calls himself the ultimate Disney fan. After chatting with him about his home animation studio and his Walt-inspired views on following your dreams, we have to agree with that title.

His Disney-inspired art studio is a testament to his dedication and passion for Walt’s vision. As a veteran police officer of 22 years, Jamey turns to his Disney-inspired drawing as a way to escape and relieve stress. As a result, a spare room became a Disney themed artist studio.

The room is half “Pirates of the Caribbean” and half “Haunted Mansion.” But that’s not the half of it. The center of this magical mousterpiece is an authentic Walt Disney Feature Animation Desk that was once at Disney-MGM Studios. If tables could talk, this desk would tell the tale of “Lilo & Stitch,” “Mulan,” “Brother Bear,” ‘Be Our Guest’ from “Beauty and the Beast,” ‘I Just Can’t Wait To Be King’ from the “Lion King” and many of the “Roger Rabbit” shorts. This animated artifact is peppered with various Disney memorabilia, at the ready to inspire the artist. “It was an item I thought I would never get the opportunity to own,” explained Wright. “It certainly puts me in my mindset for creativity. It’s a time that allows me to just get away from everything that may trouble me and find myself at ease creating my art.”

Even more amazing is his passion for animation style art has inspired him to use his talents to benefit the local Boys and Girls Club. His drawings are used to create memories for those who cannot make to the Disney parks.  He’s even held special “Disney Animation Academies” to help the children at the Boys & Girls clubs learn how to draw Disney characters as part of the clubs arts & crafts program.

Jamey’s inspiration is the values, drive and dedication of Walt Disney.

“Everything that he has stood for and represented reflects on true family values and his compassion for creativity and his visions of making the impossible possible,” said Wright. “My passion, my drive, comes from him and his accomplishments of what he was able to create.”

His ultimate dream is to become an artist for the Walt Disney Company. “Through the years, I have learned so much from other Disney artists who have shared their talents with me. I have learned that creating Disney art sets people’s minds at ease and is somewhat of a comfort zone that creates communication between fans. It bonds relationships with other Disney fans and creates friendships all their own who appreciate it. Disney puts people in a place where all their troubles are put behind them with no worries in looking for that second star to the right and straight on until morning. Creating Disney memories whatever they may be for someone can last forever. In reality, we will all grow old, but that doesn’t mean we will all grow up.”

Images courtesy of Jamey Wright.  See more of his artwork by visiting his website.