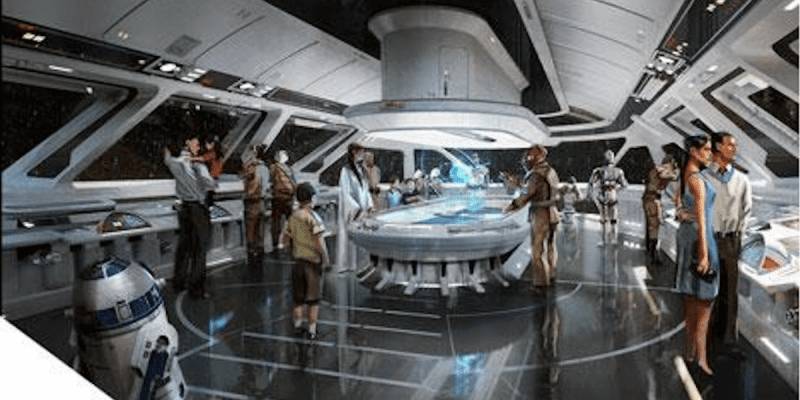 Over this past weekend at Star Wars Celebration 2017, Disney delighted fans with details of how just interactive Star Wars Land will be when it opens in 2019.

Yesterday, the Internet was ablaze with speculation that a full-blown “Star Wars” hotel may also be in the works.

When combined with the news out of Star Wars Celebration, this new hotel could be a natural and an exciting addition to the notion that guests will live out their own story not only in Star Wars Land, but throughout their stay.

The survey making the rounds via Swagbucks.com, a site that pays its registrants to submit their thoughts online. In it, a hotel is described that would be set “inside” a starship, allowing guests to fully escape into the “Star Wars” universe for a two-day experience. Concept art is included, showcasing the hotel’s lobby, guest cabins, and other ship areas.

A stay in this proposed “Star Wars” hotel would optionally be completely story-driven, with entertainment unfolding over the course of two days. Guests would be able to have interactive experiences with “Star Wars” characters and see live performances throughout the ship / hotel.

If guests prefer to observe rather than interact with characters, that’s fine too.

Lightsaber and flight training would be offered, as well as personalized secret missions that would take guests out of the hotel and into Star Wars Land.

The survey suggests the resort experience will cost $900 – $1,000 per guest and would be all-inclusive, much like Disney’s cruise ship offerings, with rooms, food, and entertainment.

When asked for a statement, Disney did offer the following comment about the survey to Orlando Business Journal:

“We know our guests love all things in the world of Star Wars, and we’re continually exploring new ideas and gathering guest feedback as we develop plans to bring Star Wars to life at Disneyland Park and Disney’s Hollywood Studios. Some of these ideas come to fruition, while many do not.”

It’s not a denial – but not a confirmation either.

The hotel is certainly only hypothetical at this point, as Disney tests the waters to see just how far guests want to immerse themselves in the “Star Wars” universe. Responses to Disney’s announcement over the weekend that Star Wars Land will be a fully interactive storytelling experience have been largely positive, with fans excited they will be able to take on a role in the saga. Some fans, however, are hesitant about the idea, stating that they’d rather just go on a traditional ride through classic “Star Wars” scenes, stating all of the interaction sounds like “a lot of work.”

So adding the option to follow the ongoing story or not at the rumored Star Wars hotel would certainly allow both active and passive audiences to enjoy such a boutique hotel experience.

So what is the likelihood that such an immersive Star Wars hotel will be built?

This is not the first time a potential resort idea has been floated around online guest surveys. A few years ago, guests were surveyed about hotel rooms themed to Disney’s Haunted Mansion attraction, complete with concept art. While many fans lit up with excitement about the idea of hotel rooms inspired by the ride’s Happy Haunts, they ultimately never saw the light of day.

The very same could be true about the Star Wars hotel.

But it certainly makes sense that Disney would want to build upon Star Wars Land as much as possible.

In recent years, there has been increasing competition with Universal Studios’ Wizarding World of Harry Potter, frequently championed as the current gold standard for themed design. Disney has been relying on Star Wars Land to be their answer to Potter – and need to one-up Universal. Many Potter fans have hoped to be able to stay overnight in Hogwarts Castle, even though Universal has never offered that chance. Star Wars could give guests that same type of experience set in an arguably even more popular franchise.

(Bloomberg dives deeper into how Disney intends on battling back against Potter in a fantastic new article.)

Meanwhile, entertainment business models are also rapidly changing as more and more people cancel their TV subscriptions – and Disney-owned channels along with them. There is an increasing focus on the parks to bring in revenue for the company in new ways that meet the expectations of today’s audiences.

If the Star Wars resort does come to fruition, it will no doubt be an incredible experience for Star Wars fans. After all, who wouldn’t want to disappear to a galaxy far, far away for a few days?