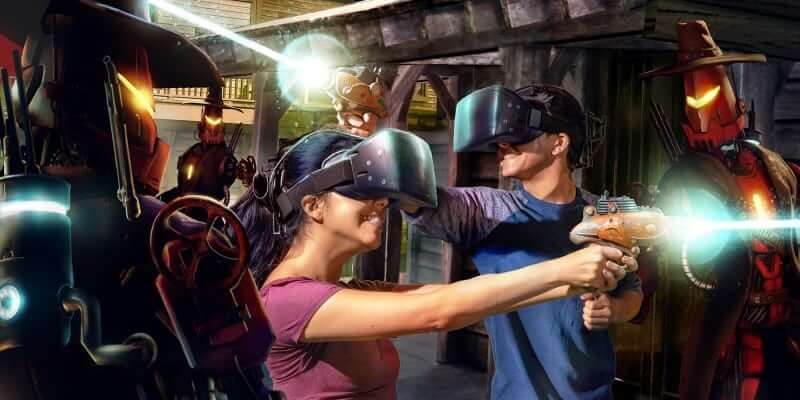 For what has historically been a quaint local park in Southern California, Knott’s Berry Farm is certainly making continuous efforts to be on the forefront of theme park technology. Today Knott’s announced a new virtual reality experience that will possibly set the standard for future attractions to come at parks around the country.

“VR Showdown in Ghost Town” will be located in Knott’s Berry Farm’s Boardwalk Arcade, and will allow guests to embark on a time-travel adventure, where they will encounter and battle robot cowboys in a dystopian future version of Knott’s western town of Calico (shades of “Westworld”, anyone?). From Knott’s official press release on the attraction:

The one-of-a-kind immersive experience perfectly combines virtual reality and a competitive gaming realm that will captivate guests. Armed with state-of-the-art wireless virtual reality headsets and futuristic blasters, multiple players will compete against one another for the highest score and bragging rights, as part of this immersive adventure, while striving toward shared team goals. At the end of the VR competition, guests will be able to view and compare scores with their fellow opponents.

Back in September, Knott’s cancelled its “Fear VR” Halloween experience after complaints from mental health advocates. This new attraction will become the very first permanent free-roaming (meaning players can move around in virtual space, as opposed to just moving their heads) VR experience at an American theme park.

“VR Showdown in Ghost Town” was developed alongside VR technology company VRStudios, and will become available to guests in April at Knott’s Berry Farm.