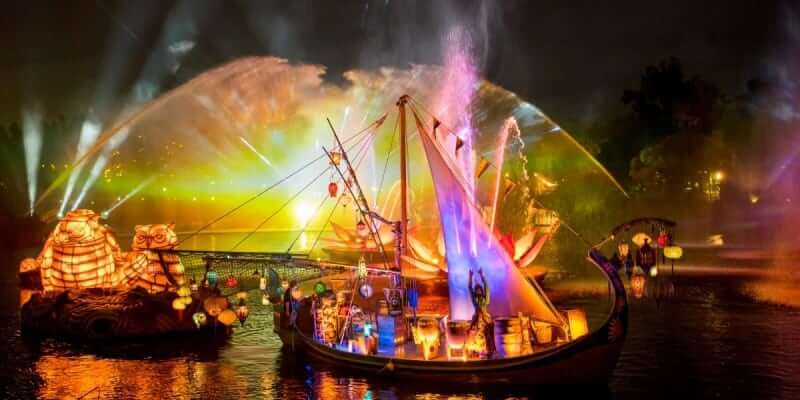 Back in 2013, Disney COO Tom Staggs gave us a “first look” at plans for an expansion to Disney’s Animal Kingdom. He also introduced the idea of the park being a full-day experience with the addition of nighttime attractions and entertainment. Staggs stated with confidence that they would “produce an experience unlike any other ever created”–an experience specific to Animal Kingdom.

At the center of this plan was a new land called Pandora. This land was to bear most of the weight in carrying Animal Kingdom through the evening hours, but other attractions were announced as the supporting props for the tentpole of Pandora. One of them, a show destined for Discovery River, was intended to help guests “cap off their day” in the park. We now know that show to be “Rivers of Light.”

While all the “supporting attractions” named by Staggs came to fruition, “Rivers of Light” struggled to take off. It was scheduled to debut nearly a year ago, but the nighttime spectacular was plagued with problems that prevented its official opening–that is until last night. On February 17, “Rivers of Light” officially opened to a public that had waited and waited in anticipation.

WATCH HIGHLIGHTS FROM “RIVERS OF LIGHT”:

To understand and appreciate “Rivers of Light” is to understand and appreciate the park for which it was made–a park whose overarching mission is to showcase the beauty of nature and give guests an experience that will connect them to it. “Rivers of Light’s” role is to support that mission in a format that is entirely new to the park, and it doesn’t just do that. It actually nails it.

Through the combination of live performance, floating sets, projections, fountains, music, and color, “Rivers of Light” tells the story of our symbiotic relationship with animals and the planet we share with them. The entire show takes on a metaphysical tone as it speaks of animal spirits and forces of nature. In this, it also invites us to put aside our personal devices for a moment and consider esoteric concepts such as a collective soul that unites all life on the planet. In truth, it is a powerful message that resonates with those that are able to hear it.

The first facet of “Rivers of Light” that grabs is the visual aspect. The opening scene of lotus blossoms gliding serenely across calm water is somewhat hypnotic, and the show only builds from there. It introduces the elements of fire, water, color, light, and shadow in ways that fit perfectly like jigsaw pieces. In doing so, “Rivers of Light” somehow evokes a sense of reverence for life throughout the show. This may be most true during the portions that project images of animals, particularly those of parents and their young. The imagery has a powerful emotional impact. It taps into something primal. It might be that it speaks directly to the part of us that feels connected to nature, gently reminding us that all life on Earth moves in cycles and that we are part of the story. Whatever it is, the presentation is stunning visually, inspiring a true sense of awe.

But what about the music? Let me put it this way: Whereas what we see in “Rivers of Light” tugs at the heart, what we hear throws it down on the mat and holds it in a Half Nelson until it taps out. In fact, the music is so strong that it is arguably the best element in the show. It is “La Nouba” meets “The Lion King,” effortlessly alternating between ethereal, operatic mezzo-soprano lines, tribal rhythms, and African choirs. This breathtaking soundtrack has the ability to hold you in aural rapture and carry you through a series of movements, reaching not just one climax but at least three. There is another aspect to this show that I sincerely appreciate, and that is the use of technology to inspire a relationship with nature. I suppose there is a minor sense of irony in this, but it is a quirk that I can applaud. In approaching the issues of care and conservation from this angle, the integrity of the message remains intact. Nature is allowed to remain “natural” because creatures and their environments are not disrupted for the purposes of entertainment.

On a more pragmatic note, this show is great because it provides seating. This one point alone makes me want to break out into a hallelujah chorus. Finally, someone at Disney realized that at the end of a long day, you don’t want to be standing cheek to cheek with strangers that smell like the animals you just visited at Rafiki’s Planet Watch [My apologies to anyone who has stood next to me during “Wishes” or “Illuminations”]. Unlike most other evening spectaculars, “Rivers of Light” offers feet a respite from the intense hours of walking and bodies a little more room than the mobs on Main Street. There are no Cast Members yelling at people to stay out of traffic paths, and there are no worries that a kid will be lifted onto the shoulders of a parent and obstruct views. So many problems are solved with the simple design of seating, and I could kiss the person kind enough to bring it to this show. I can honestly say that I, personally, have no complaints about “Rivers of Light.” I love this show from beginning to end. However, in an attempt to provide a balanced review, I feel it only fair to present some points that may affect how others perceive the presentation.

“Rivers of Light” is not a show with a straightforward narrative. There is no clear plot with a definitive conflict and resolution. There is neither a hero nor a villain. In fact, it is entirely possible to sit through the whole show and come out on the other side wondering what the heck it was all about. That is because this particular show is meant to be more experiential and less chronological, delivering its message in an abstract form. It’s a quality that some may find problematic. For that reason, I’m throwing it out there for consideration. Additionally, “Rivers of Light” is a show that lacks the grand scale of other nighttime spectaculars at Disney Parks. Most people are quick to notice the lack of pyrotechnics, and some invoke the name of “World of Color” to belittle “Rivers of Light.” In my opinion, these arguments aren’t fair.

“Rivers of Light” has to exist within a framework that the other nighttime shows don’t, meaning it has to provide entertainment without disrupting the sleep cycles of the animals that do live in the park. For that reason, I’m perfectly content with “Rivers of Light” being a more intimate experience without over-the-top pageantry. But if you are someone who needs fireworks and projections on buildings that are 189 feet tall to be impressed, this particular show will disappoint you. In my opinion, “Rivers of Light” is a fantastic addition to Disney’s Animal Kingdom. It is a gorgeous piece of showmanship–given to us by Disney Imagineering–that fits beautifully within the context of a very unique park.

Once Pandora–The World of Avatar opens this summer, “Rivers of Light” will be overshadowed by the headlining attractions in that area, but this was always going to be the case. Ultimately, though, I believe that “Rivers of Light” holds its own as a viable nighttime attraction and excels as an artistic display. Your mileage may vary, though, so keep it in mind.