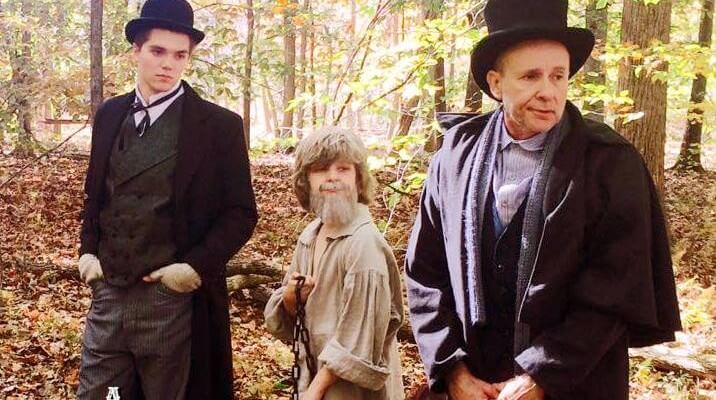 When it comes to stories of ghosts from the Haunted Mansion, there are 999 tales to tell.  Craterus Studios brings us three such stories.

They’ve been seen in the mirrors upon exiting the mansion and trying to hitch a ride moments before that. The Traveler, the Skeleton and the Prisoner – also known as Phineas, Ezra and Gus – The Hitchhiking Ghosts well known to fans of Disney’s Haunted Mansion. But how did they meet and what bonds them together?  A Hitchhiker’s Tale offers one such possibility. ITM first brought you news of this fan film in August (story here).  We’re happy to share that A Hitchhiker’s Tale has just been released on YouTube today! Written and directed by Mason Betterly and starring Scott Lee, Caleb Lenehan, Elijah Bogges as the infamous Hitchhikers, A Hitchhiker’s Tale takes back to a time when the three were not quite their ghostly selves.

As the story opens, Phineas, Ezra and Gus are about make a run for it; desperate to flee the clutches of The Carnie (played by Alexander Mc Pherson). The three attempt to find a mysterious gypsy whom they hope will help get their souls back.  Amid the adventure friendships are tested and eternity hangs in the balance for the beloved Hitchhikers. This twenty minute short story is a clever insight into the history of three of the Haunted Mansion’s most iconic residents.  Mr. Betterly has crafted a credible and endearing story of second chances and hope.  In the process we learn more about what brought Phineas, Gus and Ezra together.

While all three yet-to-be ghosts are featured in the film, it’s Phineas’ story we learn the most about. This enjoyable tale completes its conflict of good and evil with a confrontation of Phineas and the Carney and still leaves room for future fiendish fun.

With period costumes and scenic outdoor settings, A Hitchhiker’s Tale is must see for any fan of the Haunted Mansion.  Hopefully we’ll see more of Phineas, Ezra and Gus in the future and learn about Ezra and Gus’ history, too.

Comments Off on Inspired by the Haunted Mansion, “A Hitchhiker’s Tale” materializes on YouTube